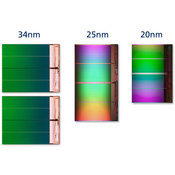 20nm Flash Memory
IM Flash Technologies, a joint venture of Intel and Micron Technology, is the first to shrink the size of NAND flash memory to 20 nanometers, which will make it possible to boost storage in smartphones and tablets while taking up less space on circuit boards.

IM said Thursday that it is providing customers with samples of 8 GB NAND devices and expects to begin mass production in the second half of this year, when the company plans to start providing samples of 16 GB devices. The 20-nm products will make it possible to build a 128 GB solid-state drive that is smaller than a postage stamp, the company said.

IM is the front-runner in the race to fit higher-capacity NAND flash in smaller areas on circuit boards in smartphones, tablets, and other handheld computing devices. "There is no other semiconductor manufacturer using a 20-nm process," Jim Handy, analyst for Objective Analysis, said in an interview. "This is the first ever."

IM has been making NAND flash using 25-nm circuitry for a year and a half. The company is releasing the smaller product, as competitors Samsung Electronics, Hynix Semiconductor, and the partnership of Toshiba and SanDisk, are ramping up 25-nm products. "They [Intel, Micron] just keep running as fast as they can, and once they're in the lead, they stay in the lead," Handy said.

IM's latest 8 GB NAND device takes up 30% to 40% less circuit-board space, depending on package type, than the 25-nm model, the company said. The reduction means smartphone and tablet makers can use the freed space for a bigger battery, larger screen, or adding another chip to power additional features.

Objective Analysis estimated that IM can manufacture 20-nm NAND for 33 cents per gigabyte versus 50 cents per gigabyte for 25-nm NAND. Such price drops are behind the steady decline in NAND flash memory prices in general. As a result, storing music, video, and pictures on NAND flash is replacing other mediums, such as CDs and DVDs.

Declining prices and increased competition, as the demand for flash memory rises with the growing number of smartphones and tablets, are expected by some analysts to contribute to a reduction in revenue in the global market. Objective Analysis predicted revenue will fall to $19 billion this year from $22 billion last year.