Imagine life without house keys or using an entire wall as a touch display. Walk through an exhibit of some of Intel's most intriguing research projects to date.
Patrick Houston
Contributor
June 28, 2012 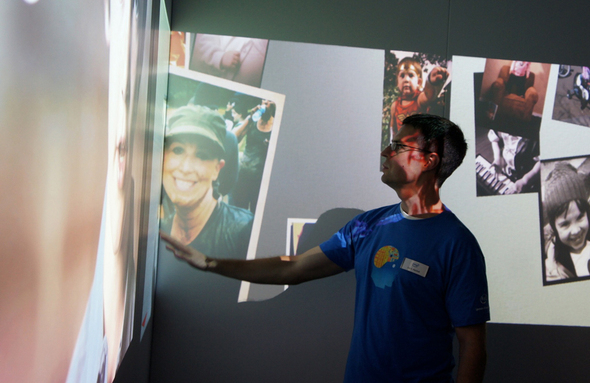 Corporate R&D labs exist to pioneer the future. Get inside one and you'll be treated to an extraordinary show and tell. If ever you can get a peek, that is. Most companies consider their research efforts state secrets, and if they showed you, they'd have to kill you, to put a commercial spin on the old spy one-liner.

Not Intel, though. The company turns its labs inside out--and actually makes some of its seminal work public annually at a daylong event called [email protected] Even if some of these projects might never come to be, they make for engaging and thought-provoking spectating.

How about turning any wall--or any surface, for that matter--into a display? That's just what you see here as one of Intel's researchers uses touch gestures to move and manipulate photos. Using off-the-shelf hardware components--the secret is in the software--Intel demonstrated a way to also interact with a video and music library and a social media activity stream. It even showed a way to display your personal photos by the mood they convey.

This interactive surface project was among 20 conceptual or prototype technologies and their applications Intel touted at this year's [email protected] event in San Francisco.

Yes, Intel's efforts are aimed eventually at selling more of its microprocessors. But if this year's [email protected] was any indication, those chips will be increasingly finding their way into novel uses with far-reaching consequences. Imagine a life without keys, an international business meeting with no language barriers, or never losing your way inside a hospital or office building.

It was striking to witness how far Intel is going to put people and their experiences at the center of its work. After all, the market for chips, as one researcher put it, relies at the end of the day on the humans who will create the demand for them. Intel has studied, for example, how people drive in at least eight different nations. Did you know: Australians keep everything in the car because theft isn't an issue there?

Some subthemes also were on display. Many of these futuristic projects rested on the use of so-called big data--massive, unstructured, real-time amounts of it--generated not just by our online activities but the growing number of devices and sensors populating our lives.

With university researchers, Intel is exploring ways to analyze the oceans of data we're spewing to reveal actual, rather than hypothetical, ways we behave. What happens when there's enough data to dispense with speculation about us and instead certifies our individual and collective behaviors beyond doubt? What would that mean for a company when all the guesswork comes out its business and prediction becomes certainty? The implications are enormous.

That all of life can be quantified, as it increasingly is, presents exciting opportunities--and frightening questions. But for now, leave the heady stuff behind and focus your eyes on the visual feast of the future according to Intel.