iOS And Android Phones Are Taking Over The World

It's a good time to be a mobile phone software developer: iOS and Android phones are being adopted at a rate never seen before in consumer tech history, according to mobile analytics firm Flurry.
Boonsri Dickinson
Associate Editor of BYTE
August 27, 2012

iOS and Android devices are literally taking over the world.

There has been no other device in history that has been adopted at this rate, according to mobile analytics firm Flurry.

Flurry points out that people are using iOS and Android 10 times faster than PCs were used in the 1980s. It's also happening twice as fast as the Internet boom of the 1990s.

And even with all the craze of Facebook and Twitter? The adoption of iOS and Android devices is happening three times faster than social networks.

The U.S. leads in number of active iOS and Android uses. However, China is catching up and will be number one by the end of the year, predicted Flurry. 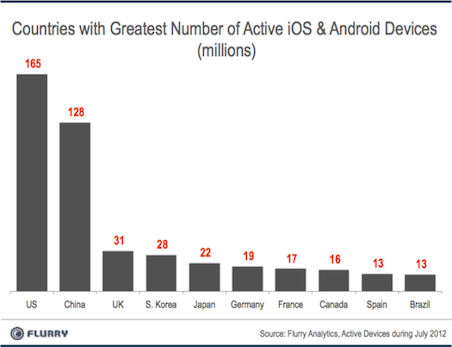 The unprecedented success of mobile devices makes this a good time to be a mobile software developer, noted Peter Fargo, VP of marketing for Flurry. "Developers have an unprecedented opportunity to distribute software across borders like never before in history," he said. "Any team, from any country, can distribute their iOS and Android apps to the more than 100 countries that both Google Play and Apple's App Store support."