The hot new phone on the market is living up to its billing. Normal use got my iPhone 5 up to 111 degrees F. At this temperature it's too hot to hold.
Todd Ogasawara
Contributing Editor
September 24, 2012

Apple's newly released iPhone 5 is a hot product. And, mine is sometimes literally too hot to hold comfortably. 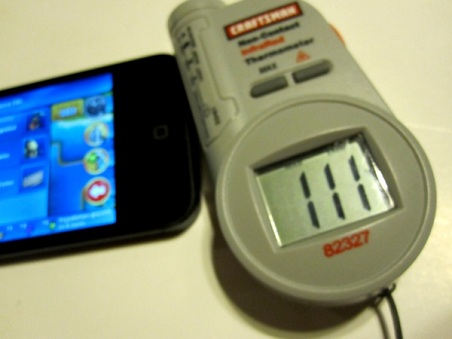 I received my iPhone 5 on Friday, Sept. 21, 2012, like millions of other people. I spent that evening configuring it for use the next day. My daughter had a cross country meet on Saturday morning. So, I had a lot of time to hang around during the other races and post-meet activities while playing with the phone and waiting for her race to begin. In fact, I had literally all morning.

I noticed a couple of odd issues with my iPhone 5. But the most noticeable was that the phone felt very warm after using it for about 30 minutes to move icons around, check email, browse the Web, and test a few apps. In fact, it became uncomfortably warm. I could not remember my iPhone 4 or iPad 2 becoming this warm from what I considered normal use. I ran a quick search and found two items in Apple's own support forums with comments from other people noting a similar heat issue.

There are comments on MacRumor's discussion forum too:

So, how hot does my iPhone 5 get? After moderate use, I found the back of the phone quickly gets to about 95 degrees Fahrenheit. This can be slightly uncomfortable. After running processor-intensive apps like the game Civilization Revolution, the iPhone 5 soared to 111 degrees. At this temperature it was too hot to hold.

The hottest area of the iPhone 5 is a strip on the back just under the camera. However, the entire back of the phone becomes very warm--over 90 degrees. It seems like the phone becomes hot faster if it is using 3G or LTE for data. My informal observation is that it runs slightly cooler when Wi-Fi is used. So, the heating might be related to the radio used for data.