Phone prices are being aggressively lowered by Apple's competition and Apple appears to be responding with price cuts, something we haven't seen before. Never mind that excellent Android and Windows Phones can be had for a lot less than the iPhone's $199 with a 2 year plan; more and more users are opting for older and cheaper iPhone models. The bottom line of all this is that Apple's average selling price for an iPhone is going down.
Larry Seltzer
Contributor
December 27, 2012

Obviously the iPhone, and the iPhone 5 in particular, are big hits. iPhones have always been big sellers in spite of Apple's premium positioning in the market. But this may be changing, with the biggest competition coming from Apple itself.

Earlier this month, for the first time, retailers started discounting iPhones below Apple's dictated retail prices — well-below, in fact. Fry's sells it for $126, $73 off the $199 price you'll find at most other outlets. Best Buy has the baseline iPhone 5 with the two year plan for $149.99

Even more interesting is the effect in iPhone 5 sales of iPhone 4S sales. At the same time that Apple released the iPhone 5 they discounted the iPhone 4 and 4S. The 4S from Apple costs $99 with a 2 year plan and the iPhone 4 is free. But you can get a 4S from retailers for $49 or less. I doubt anyone discounts the iPhone 4 below free.

Probably as a result of these prices, research from Consumer Intelligence Research Partners (CIRP) shows that the iPhone 5 is a much smaller percentage of iPhone sales this season than earlier iPhones were after their launch. The iPhone 5 seems to me to be a clearly better phone than the 4S, so that $100 or so makes a big difference to many consumers. (Of course, those consumers probably aren't thinking about how the data plan they have to buy will rip them off for far more than what they're saving on a specific phone, but that's another column.)

The bottom line of all this is that Apple's average selling price for an iPhone is going down. 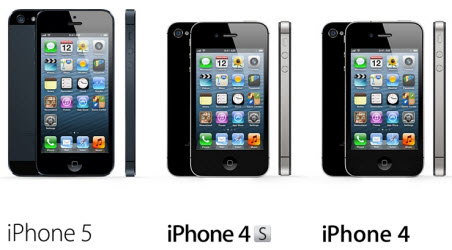