IT Pro Ranking: IT, Not Just Users, Abandon RIM 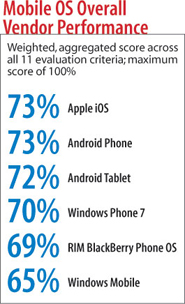 Looks like IT is turning its back on BlackBerry. Users have been abandoning the device in favor of touch-screen, Web-centric ones from Apple and Google, but until recently it looked like IT would remain faithful.

Our IT Pro Ranking found that the 651 tech pros surveyed consider Apple iOS and Android phone OS the best-performing platforms. Research In Motion landed in fifth place. The rankings are based on IT pros' ratings in areas such as reliability, performance, and costs.

Apple and Android are also the top platforms for which companies are developing internal and customer-facing apps. Even Windows Phone 7, a new entrant into the mobile OS wars, is gaining broader acceptance.

There are several reasons for RIM's fall. First, back when IT dictated mobile choices, BlackBerry scored high in areas IT favored such as security and email. Now that many companies are letting employees pick their devices or even use personal ones for work, they want apps and entertainment as much as productivity(see comparisons below).

Second, while Apple and also Google with Android are making every function accessible with a touch or a swipe, the BlackBerry functions are still keyboard based. RIM was too slow to catch the shift, and when it tried (twice!), it failed. Finally, third-party mobile device management and security software can provide most of the features IT wants to see in mobile devices, erasing BlackBerry's native advantages.

Your mobile strategy, including security, device management, and application development, is going to have to include a mix of platforms. It won't be easy. For example, Google's phones run one version of Android and its tablets another. Microsoft is eager to join the party, too, and hopes to see Windows on multiple hardware devices. And RIM isn't giving up, having recently released its new tablet OS and several improved smartphones.

The days of companies dictating a single mobile platform are over, if they ever really existed.