SEARCH
A minimum of 3 characters are required to be typed in the search bar in order to perform a search.
Announcements
Alert
Got some free time? Grow your knowledge from the comfort of your computer for FREE!
Alert
Are you looking to stay on top of IT trends? Check out our FREE webinars and virtual events!
Alert
Planning for 2023? Be sure to check out our upcoming in-person events!
Report
How does your salary stack up? 2022 IT Salary Survey Results Revealed
PreviousNext
Mobile Devices
1 MIN READ
Commentary

Sometimes they get it right the first time around. Radio Shack's TRS-80 Model 100 came out way back in 1983. It was the first practical consumer ultraportable computer. It had no floppy or hard disk drive. Everything was stored in RAM, kept alive by four AA batteries when the computer was turned off.

Those batteries could keep the TRS-80 running up to 20 hours. It had 32KB (that's kilobytes) of ROM, 8KB of RAM and its eight line display managed a 240x64 pixel resolution. It even had built-in communication capabilities -- thanks to a 300 baud analog modem.

Most amazing was its keyboard. I still think about it 30 years later when I use today's devices. I say it's the best keyboard ever produced for an ultraportable device, including what's out there today.

The Model 100 even had a BASIC interpreter that let you write your own software for it. The Model 100's firmware is said to be the last product that Microsoft co-founder Bill Gates served as the developer for. 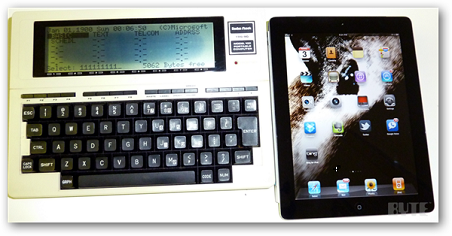 I bought the unit seen in the photo above in early 1984. An iPad 2 sits to its right, just to give you an idea of the TRS-80's size. As you can see, it still turns on and works when four AA batteries are inserted into it. They used to build stuff to last in the old days. The TRS-80 Model 100 is a keeper.