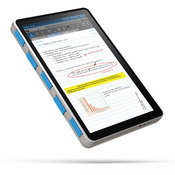 The tablet was announced by the startup in September as a less expensive option for students than the company's previously announced dual-screen tablet. "Since launch, we have been encouraged by the positive response to Kno and we are excited to deliver the first units to our most passionate customers -- students and educators," said Osman Rashid, Kno CEO and co-founder, in a statement. "Over the next month, we plan to deliver units to pre-order customers and work closely with them to ensure a great user experience."

With a 14-inch touchscreen, Kno, which is short for knowledge, has a larger than typical tablet screen. The device features a customized Ubuntu OS, a dual-core ARM Cortex A9 CPU, 512-MB RAM, 16 GB or 32 GB of onboard storage, a micro USB, microphone, and 3.5-mm audio ports. The device has glare-resistant coating and weighs 2.6 pounds.

The Kno tablet blends textbooks, course materials, note-taking, web access, educational applications, and digital media, according to the Santa Clara, Calif.-based company. Users can utilize Kno's digital bookstore to access textbooks from most of the major publishers, the company said, and new books are added regularly. In three semesters the tablet pays for itself in book costs since digital textbooks typically cost between 30% and 50% less than traditional textbooks, the company claims.

Instead of requiring publishers to tailor their e-books for its hardware, Kno has developed an automated process to convert a standard electronic file for a book in three to five minutes, using Adobe Systems' PDF format on the device, CEO Osman Rashid told the Wall Street Journal.

The Kno tablet is available as both a single and dual 14.1-inch screen. The single device retails for $599 and the dual-screen version is $899. Because the tablet is only available in limited quantity right now, only those who have received an invitation are able to purchase it, the company said. Shipments are being staggered to pre-order customers, who will receive their devices in the next month, Kno said. Anyone interested in purchasing a Kno tablet can fill out a purchase form on the company's website.