8 Phablets To Watch
(click image for larger view)
Lenovo revealed two new multimode tablets late Tuesday. The Yoga 8 and Yoga 10 share most features, other than screen size, and run Google's Android operating system. The tablets can be converted into three distinct modes, opening up new ways for users to interact with them.

Lenovo decided to take a new approach when designing the Yoga tablets in hopes of addressing three challenges tablet users face: fatigue when holding tablets, lack of kickstands, and poor viewing angles. The Yoga 8 and Yoga 10 both feature a large cylindrical handle that serves two purposes: to give users something to hold onto, and to house the large battery.

The three usage modes, as described by Lenovo, are hold mode, stand mode, and tilt mode. Lenovo believes the cylindrical handle will make the Yoga tablets less tiresome to hold and use. Want to set the Yoga on a table to watch some video? Rotate the cylinder 90 degrees to deploy the stand. With the stand opened, the Yoga tablets can be set on tables or desks with viewing angles ranging from 110 degrees to 135 degrees. Tilt mode is for typing. Thanks to the cylinder's bulk, when the Yoga tablets are placed on a flat surface they form a natural typing surface. 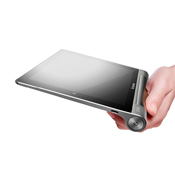 Lenovo claims that the Yoga 8 and Yoga 10 offer up to 18 hours of battery life, which is nearly twice as long as most other tablets on the market.

[ Nokia has jumped into the tablet market. Here's the scoop on its new Lumia 2520: Nokia Debuts Lumia Windows Tablet, Smartphones. ]

The Yogas are powered by 1.2-GHz quad-core MT8125 processors paired with 1 GB of RAM. They come with 16 GB of storage as well as support for microSD cards up to 64 GB. Both offer 5-megapixel main cameras, 1.6-megapixel user-facing cameras for video chats, Dolby DS1 audio with stereo speakers, and the usual set of connectivity options, such as Bluetooth 4.0 and Wi-Fi. Both run Android 4.2 Jelly Bean with some software customizations from Lenovo.

The Yoga 8 is available at Best Buy stores beginning Wednesday for $249. The Yoga 10 is available from Amazon.com, BestBuy.com as well as brick-and-mortar retailers for $299.

These prices are not going to help Lenovo's new tablets. (Surely Lenovo doesn't really believe that its new spokesperson, Ashton Kutcher, is going to drive sales of these tablets.) Google's Nexus 7, which is the best small Android tablet available on the market today, costs $229 for the 16-GB version. Last year's iPad Mini costs $299. Lenovo clearly hopes its unique hardware will help the Yoga 10 and Yoga 8 compete with similarly priced tablets.