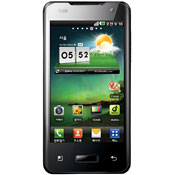 LG Optimus 2X Smartphone
(click image for larger view)
LG Electronics says it will release the first dual-core smartphone next month in Korea, followed soon after by releases in Europe and other Asian countries. The company did not indicate a release plan for the Optimus 2X in the United States.

The new smartphone will run Nvidia's Tegra 2 system-on-a-chip (SoC) that includes two ARM cores with a clock speed of 1 GHz, according to an LG press release published Thursday. The company is claiming the dual-core processor will deliver higher performance and play video and games smoother than devices powered with single-core chips.

The march to multiple cores in smartphones is important as the devices take on more tasks once left to PCs, giving consumers more reasons to turn to the handheld device instead of a laptop. "Dual-core technology is the next leap forward in mobile technology so this is no small achievement to be the first to offer a smartphone utilizing this technology," Jong-seok Park, chief executive and president of LG Electronics Mobile Communications, says in the release.

One unanswered question is how much more battery power the additional core will consume. That won't be known until the device is released. LG and Nvidia claim the Tegra 2's power consumption is acceptable for a smartphone.

The Optimus 2X offers video playback on a 4-inch display at a high-definition resolution of 1080p. The device can connect wirelessly to any HDTV or other digital device that's compatible with the Digital Living Network Alliance (DLNA) standard.

The phone also includes an 8-megapixel rear camera and a 1.3-MP front-facing camera. Other features include 8 GB of internal memory, a slot for a microSD memory card, and a micro-USB port. The phone will be released with Google Android 2.2, known as Froyo; and will be upgradeable to Android 2.3, or Gingerbread. Google is expected to release the operating system by the end of the month.