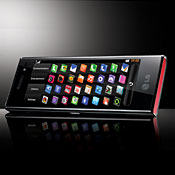 LG Electronics is showing off the next version of its popular Chocolate line of feature phones, and the latest model places a strong emphasis on watching videos on the go.

First unveiled on the company's Twitter feed, the BL40 Chocolate has a large, 4-inch touch screen. This makes the screen larger than most other cell phones and smartphones, and the new Chocolate's display will also have a 21:9 aspect ratio for a more cinematic experience, LG said.

The screen has an 800 by 345 resolution, which should make it easier to view full Web pages. Additionally, the feature phone will have a dual-screen user interface which will enable users to display two different types of content simultaneously.

"Although much interest seems focused on the striking shape of the handset, the real surprise will be when people discover the advantages of the 4-inch screen in terms of viewing pleasure and ease of use," said Dr. Skott Ahn, CEO of LG, in a statement.

The company did not give more technical details about the handset, but the pictures indicate it will have a 5-megapixel camera. LG did say the handset will begin shipping to 54 countries in the third quarter, but there is no word on pricing.

The new Chocolate handset is part of LG's strategy to use powerful, attractive-looking handsets to overtake Samsung as the second-largest handset maker in the world. LG will also be bringing out a new Prada phone, a luxury lineup like Nokia's Vertu brand, and it will be placing a larger emphasis on smartphones.