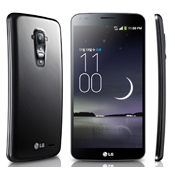 LG G Flex
LG revealed the G Flex on Monday, a smartphone that LG says is the first "real" curved device. More important than the device itself are the technologies LG used to create it, as they will pave the way toward more interesting hardware further down the road.

LG says the screen, which was designed by its sister company, LG Display, is a plastic OLED panel. It is thin, light and flexible. The panel is made from plastic substrates rather than glass. These attributes are what allow its shape to be curved. According to LG, the screen uses "Real RGB" -- or red, green and blue subpixels -- which makes it brighter and more accurate than traditional OLED panels. Because it is made from plastic and not glass, it is more durable than today's more-common panels. The screen measures six inches diagonally and has 1280 by 720 pixels.

LG also had to create a curved battery to fit into the arched design. The battery was made with LG's new Stack & Folding technology that reduces stress on the battery when it is bent. The battery rates a hefty 3,500 mAh.

How does a curved shape benefit the user? LG says the curve fits human faces better, reduces the distance between the mouth and microphone, and improves voice and sound quality. According to LG, the curved design is more comfortable to hold in the hand, and the device fits more snugly in rear pockets. (What about front pockets, LG?) Last, the curved screen offers "an IMAX-like experience" for video and games. (That's probably overselling it a bit, LG.)

LG claims the G Flex has a "self-healing" rear cover that can "recover from the daily wear-and-tear scratches and nicks that un-cased smartphones are likely to receive." The back surface has some sort of elastic coating that is resistant to damage, but LG didn't explain how it works.

The G Flex carries over most of the specs from LG's G2 flagship smartphone. It is powered by a 2.26-GHz quad-core Snapdragon 800 processor with 2 GB of RAM and holds 32 GB of storage. It has a 13-megapixel main camera and a 2-megapixel user-facing camera, both of which can record HD video. It positions the volume/control buttons on the back surface, just like the G2, and includes a range of sensors in addition to support for wireless network technologies such as Wi-Fi, Bluetooth 4.0, NFC, GPS and LTE 4G.

LG created a handful of new software features for the G Flex that are worth discussion. The first is Dual Window, which apes Samsung's split-screen multitasking feature. Dual Window lets G Flex owners run two apps side-by-side on the screen. The G Flex can indicate to users when it sees their face, can flash the rear LED key to indicate the camera countdown, and can flash the rear LED key to show when there's an urgent incoming call. The G Flex also includes something called QTheater, which gives users quick access to photos, videos and YouTube right from the lock screen. LG says "the apps appear with the effect of theater curtains being drawn." OK.

The LG G Flex is being released in Korea next month. LG did not say where it will land after that. U.S. network operators have not yet voiced support for the G Flex.