Your silicone bumper won't help if your smartphone falls into a hot tub or sink. Check out these state-of-the-art coatings for phones, tablets, and even laptops, fresh from Mobile World Congress.
InformationWeek Staff
Contributor
February 27, 2012 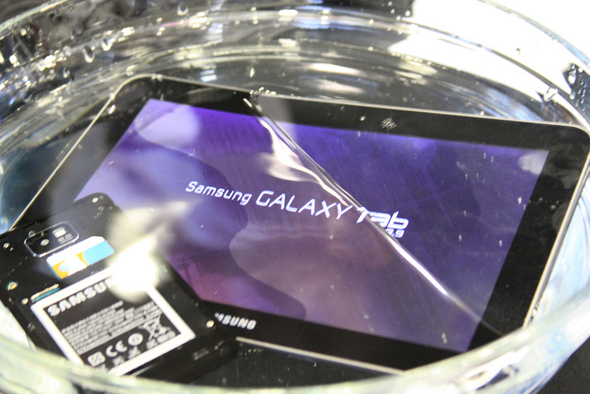 Does talking on the phone in the rain make you nervous? Do thoughts of spilling wine on your phone cause anxiety? Liquid is the number one killer of smartphones, but a number of companies want to help you deal with potential moisture problems. At Mobile World Congress, Liquipel, HzO, and P2i showed off technology that's designed to provide essentially undetectable protection for your phones, tablets, and laptops from accidental water damage.

Nano-coating technology allows devices like phones and tablets to repel moisture, keeping the electronics protected and performing without interruption, the vendors say. All of the companies described here provide slight variations on their process, partners, and applications, but each one offers the same assurance--protecting your valuable device from accidental liquid damage.

While differences in the technology are slight, the companies take varied approaches in how they are delivering their services. Liquipel is the only vendor in this bunch selling directly to consumers in the U.S.; it has also announced expansion plans for customers in Australia, plus new operations in Brazil and China.

HzO is trying to partner with manufacturers to offer their protective coating. P2i's approach is similar to HzO's; they already have a partner in Motorola, which now offers the RAZR phone with "SplashGuard" coating.

Dropping a phone into a glass of water might be an obvious way of showcasing water protection. However, these companies were more creative at Mobile World Congress. HzO took the water test a step further by removing external panels to expose the battery and circuitry. Liquipel demonstrated how a tissue treated with the same nano coating can be dunked into water and remain completely dry as the water beads off immediately. P2i had examples of two phones with covers removed--one had been treated and one had not. It was easy to see the corrosion and damage that water damage does over time to a phone. This is why phones with water damage often show delayed signs of bad performance or misbehavior.

Protective, waterproof cases like DryCASE and Otterbox Armor have been available for a while (though some people find them awkward or clunky.)

The new protective coatings demonstrated at Mobile World Congress are transparent and virtually undetectable. Treatments do not disrupt look and feel of devices, nor do they affect performance, the vendors say.

This slideshow will give you a look at devices treated by these companies to see the way they react to liquid. You can decide for yourself if this technology is going to be a must-have for phones in 2012.

Of course, that might depend on whether you store your tech devices in a bowl of water. HzO decided to show that a Samsung Galaxy Tab can perform perfectly with HzO's protective coating, even while sitting in a bowl of water. Removing the back of a phone won't cause problems as the treatment coats both the inside and outside of the device.