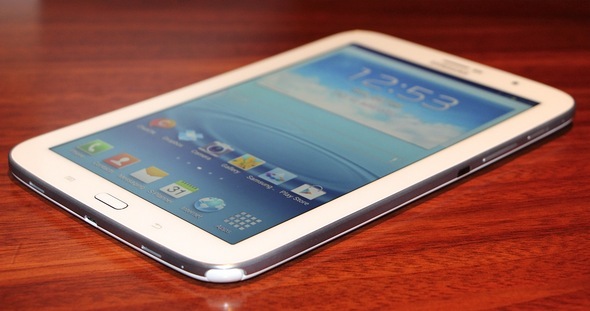 The Samsung Galaxy Note 8.0 looks to find the middle ground between full-sized tablets and smartphones as a boardroom and living room companion.

At first blush, the Samsung Galaxy Note 8.0 tablet might seem like a knee-jerk reaction to the Apple iPad Mini. It has a similar screen size and similar, mid-range specs for a tablet, but after using it for a bit in Barcelona, I've decided the Note 8.0 is in many ways a category-defining product.

The Note 8.0 offers an 8-inch screen and is powered by a quad-core ARM Cortex A9 processor, with each core clocked at 1.6 GHz. It is paired with 2 GB of RAM and up to 32 GB of storage. As with most tablets, the Note 8.0 has two cameras: a 5-megapixel main camera and a 1.3-megapixel user-facing camera. On the wireless front, the Note 8.0 includes dual-band 802.11a/b/g/n Wi-Fi, GPS, GLONASS and Bluetooth. Samsung said at least one U.S. wireless network operator will sell the Note 8.0 with LTE 4G inside, but declined to say which one.

The Note 8.0's hardware is solid. Anyone familiar with Samsung's products will easily see the family resemblance between the Note 8.0 and other devices such as the Galaxy S III and Note 2. The units on hand in Barcelona were all white, and the glossy plastics are highly reflective. The slippery surface elements mean you have to take care when holding the Note 8.0, as it can be difficult to get a really good grip on it. The device has a comfortable size and weight, and felt natural to use. It doesn't have the same high-class feel that Apple's metallic tablets do, but the Note 8.0 is a step up from what I've seen on other tablets.

The tablet's 8-inch display includes 1280 x 800 pixels. By way of comparison, the Apple iPad Mini has a 7.9-inch screen with 1024 x 768 pixels. The Note 8.0's TFT LCD looked brighter and sharper than the iPad Mini's, though it still doesn't compare to high-resolution products such as the Samsung Nexus 10.

Samsung is working hard to differentiate its products from not only Apple's, but also its Android rivals. In this case, Samsung hopes to accomplish this with the S Pen stylus and S-branded applications on board. The Note 8.0 has some of the S Pen behaviors we've come to know and love, such as the ability to run two apps side-by-side at the same time; run video on top of other apps; and of course use the S Pen for text and other input. The Note 8.0 will be the first tablet from Samsung to include the new Awesome Note application, which is a to-do list app for those who like to keep their lives highly organized.

Where Samsung steps up its game is in the living room. The Note 8.0 can control home theater equipment thanks to a built-in IR blaster. The Note can interact with the owner's television beyond simply changing the channel or adjusting the volume. It comes with a new media application that can pull down channel guide content from the owner's cable TV provider. The user can then search through the guide for content rather than use the television's on-screen tools.

The Note 8.0 isn't a giant leap forward in terms of features, but it does take another step toward defining how we may use tablets in the years to come. Pricing and availability of the Note 8.0 have yet to be released.

Read on for a look at other breakthrough gadgets from Mobile World Congress 2013 in Barcelona.