Nokia jumps into the tablet market with the Lumia 2520 and shows off its first phablets, too.
Eric Zeman
Contributor
October 22, 2013 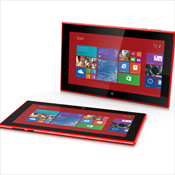 Nokia today announced a handful of products that are likely to be the last bearing the Finnish company's name. The tablet, smartphones and feature phones round out a busy year for Nokia, and mark the end of an era as Microsoft consumes the one-time giant.

The Lumia 2520 is Nokia's first foray into today's tablet market. The device features a 10.1-inch full HD screen with 1920 x 1080 pixels. According to Nokia, it has a super-bright mode that makes it easier to see outdoors, and it is protected by Gorilla Glass 2. The 2520 adopts the colorful design language used by its smartphones, and it will be offered in red, cyan, white and black. The shells are made from polycarbonate and have smooth lines.

The tablet is powered by a 2.2-GHz quad-core Qualcomm Snapdragon processor and has 2 GB of RAM and 32 GB of internal storage. It connects to most wireless networks, including AT&T's LTE network in the U.S., and offers a spate of sensors. The Lumia 2520 has a 6.7-megapixel main camera and a 2-megapixel user-facing camera. The device runs Windows RT 8.1, not the full version of Windows. This will likely be its biggest lynchpin. Windows RT can run apps developed for RT and WP8.1, but not full Windows apps. In other words, the Lumia 2520 is a competitor with Microsoft's own Surface RT.

[ Is Microsoft too late to the phablet party? Read Why Windows Phone Needs Phablets. ]

The 2520 will go on sale later this year for $499, which is $150 more than Microsoft's own tablet. Nokia is also offering a novel cover/keyboard combo that includes two USB ports. The cover costs an additional $149. 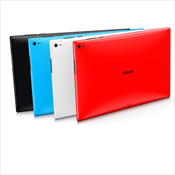 The King Kong of Windows Phone devices, the Lumia 1520 is Nokia's first "phablet." The device features a 6-inch full HD display, the largest and most pixel-rich of any Windows Phone. Like the 2520, it also has enhanced outdoor viewability, Gorilla Glass 2, and can be used with gloves on. The larger screen is able to take full advantage of the Windows Phone 8.1 operating system, which adds support for a third row of Live Tiles. This means users can stuff more content onto their home screen. The 1520 has the same Snapdragon 800 processor under the hood as the 2520, as well as the same RAM, and storage, and connectivity/sensors.

Nokia is taking imaging to the next level with the 1520. The camera rates 20.1 megapixels and uses Zeiss optics. It offers lossless zoom and optical image stabilization and can capture wide-angle shots. Nokia has customized the software even more than the hardware: The 1520 will support RAW images and has a new camera app that combines the best features of its standard camera app with Nokia Camera Pro.

The 1520 will be exclusive to AT&T and should be available later this year. Off-contract pricing starts at $749.

The Lumia 1320 has a big screen, but it is not a high-end phone. Think of it as Nokia's answer to the Samsung Galaxy Mega. It has a 6-inch 720p HD display, but a slower dual-core Snapdragon 400 processor, 1 GB of RAM, a 5-megapixel camera, and fewer connectivity options. There are no plans for the 1320 to hit the U.S. just yet. It will be available overseas for about $339.

In addition to the new hardware, Nokia talked a lot about applications and software. The company demonstrated a wide range of new apps that are coming to the Windows Phone platform for the first time, including popular ones such as Instagram, Vine, and Flipboard, among many others. Nokia -- and probably Microsoft, too -- has done a good job convincing developers to get behind Windows Phone and support its devices.