Slideshow: 7 Hottest Features In Windows Phone 7 Mango
(click image for larger view and for slideshow)
Under a deal with China Telecom announced Wednesday, Nokia said it would bring its first Windows Phone to the People's Republic starting next month.

"We're excited to introduce our first Lumia smartphone, the Nokia 800C, to this important market with our exclusive launch partner, China Telecom," Nokia CEO Stephen Elop said in a statement. "Working closely together, we've created a compelling, locally relevant experience on the Nokia 800C especially for people in China." 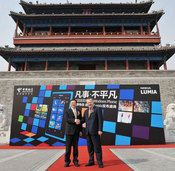 The phone will give Chinese users access to major Internet service providers, including Sina, SOHU, Tencent, and Renren. Users will also be able to access apps for the Chinese versions of magazines such as Cosmopolitan, Harper's Bazaar, and Esquire. They'll also get free versions of games like Fruit Ninja and PVZ.

Access to international carriers like China Telecom is among the reasons why Microsoft is paying Nokia billions of dollars to develop and market Windows Phone handsets. Nokia remains one of the largest sellers of mobile phones in China, and more than 32 million smartphones were sold in that country in just the last quarter, according to market watcher Strategy Analytics.

The Lumia 800 is yet to be available on a plan from a U.S. carrier, but it is being sold unlocked by Microsoft as part of a bundle that includes Nokia Purity HD stereo headphones by Monster, a Nokia Play 360 wireless Bluetooth speaker, and a Nokia Lumia Bluetooth headset. Gadget fans might want to wait for a carrier plan, however, as Microsoft is selling the bundle for a whopping $899.

The phone itself features a 3.7-inch AMOLED display, 8-megapixel camera with Carl Zeiss optics, 16 GB of storage, and a 1.4-GHz Snapdragon processor from Qualcomm. Earlier this year, Nokia rolled out the Lumia 710 and also introduced the higher-end Lumia 900 in the U.S.