Nokia Lumia 810 A Win For T-Mobile

The Nokia Lumia 810 is an excellent, if not top-of-the-line Windows Phone available on T-Mobile. It's reasonably priced, has a top-notch camera and intriguing software, including two music apps that stream free tunes, "augmented reality" to show you what points of interest are right in front of you, and Nokia's highly-regarded maps. It also has a screen that's clearly a class or two below the best ones on the market, such as the iPhone 5. If you want a better screen on a Windows Phone, choose th
Larry Seltzer
Contributor
December 28, 2012

Windows Phone fans who want a phone on T-Mobile (or vice-versa) will do well with the Nokia Lumia 810. This model is one of a family of Lumia phones, one each on AT&T (the Lumia 820), Verizon (the Lumia 822, which we reviewed recently) and this, the T-Mobile Lumia 810. 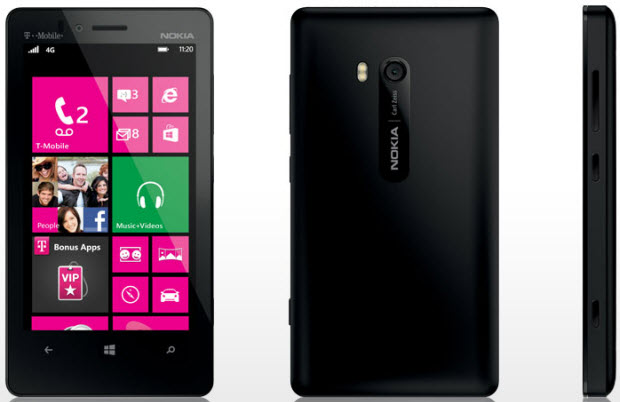 T-Mobile charges $99.99 for the Lumia 810 with a two-year plan. It is also available for $499 with no commitment at Amazon Wireless. An impressive collection of Nokia software available either bundled or as free downloads from the Windows Store greatly enhances the already good experience of Windows Phone 8, but the overall app selection in the Windows Store is still disappointing at times.

Whether any of the Lumia 8xx phones are a good deal compared to the beefier Lumia 920 is a difficult question. The Lumia 920 is AT&T-only, so that alone may make it unacceptable to many users, but it also lists for $99; AT&T charges $49 for its Lumia 820, a phone roughly similar to the 810 reviewed here. All of the 8xx phones have the same camera; they and the 920 have all the same Nokia apps. But the Lumia 920 has a better camera and a slightly-larger but much better display. Because of that display, the 920's larger battery is still rated at slightly less life than the 810's.

There are too many variables to make one recommendation, but I would think that if AT&T is an acceptable choice for you, the Lumia 920 will be hard to pass up.

Consider also that the Nokia phones are larger and heavier than the iPhone 5. The iPhone 5 weighs 112 grams, the 810 is 145 grams and the 920 weighs in at a 185. This sounds like a big negative, but the 920 has been very well-received and is often listed as out of stock in some channels, so perhaps this issue is not so weighty after all.

The 810 looks only slightly different from the 820 and 822 at first, but there are some differences. On the good side, the 810 is slightly thinner. The 810 and 820 have 8GB flash built-in, while the 822 has 16GB and the 920 has 32GB. The 8xx phones all have a MicroSD slot, but the 920 lacks one and is therefore limited to its internal 32GB of storage. This is probably the biggest limitation of the 920. All four phones have the same 1.5GHz dual-core Qualcomm Snapdragon S4 processor, 1GB of RAM, and Qi wireless charging as an added-cost option in the form of a replacement back cover.

Both in theory and in practice I think the HSPA+ in the 810 is not a really big deal. The download speed rating on the 810 is 42.2 Mbit/s. LTE speeds vary among phones; the 820 and 920 have rated download speeds of 100Mbit/s and the 822 has 50Mbit/s. The T-Mobile phone never felt slow to me, but your mileage will inevitably vary with local network conditions and demand.

Among the many Nokia apps available is a panorama photo app. Behold my disorganized office. (Click for larger image)

T-Mobile includes 3 bonus apps with their data plan: a subscription to Slacker Radio, a Pandora-like service with 2.5 million songs; T-Mobile's 411 & More, a hands-free service with directory and other info; and its CallerTunes service, which lets you record your own status greeting and to replace the ring a caller hears when he or she rings you with music. I didn't test these extensively, but they worked for me.

The apps from Nokia are much more impressive and useful. Nokia's maps are very good. Unlike some other companies in the mobile phone business, Nokia has been doing maps for a long time and has a good reputation for it, albeit mostly based on use abroad and in limited areas of the US. One cool Nokia Maps feature is that you can download maps for offline use so that you can do GPS navigation without a data connection. Nokia Maps and the turn-by-turn GPS program Nokia Drive (currently a beta) are separate programs.

Finally, there is a separate Nokia Transit app which gives public transit directions between points. In my case I must say the directions were awful, none of them employing the commuter rail which goes right through my town. Google Maps — which Google deliberately prevents from running on Windows Phone — presented much better transit directions.

Nokia also includes several photography enhancement apps, such as the one for making panorama shots like the one above; Smart Shoot, which lets you take several photos of a group of people and then pick the best faces from them for the one to keep; Nokia City Lens, which overlays the camera view of the scene in front of you with location information. See the image below for an example. 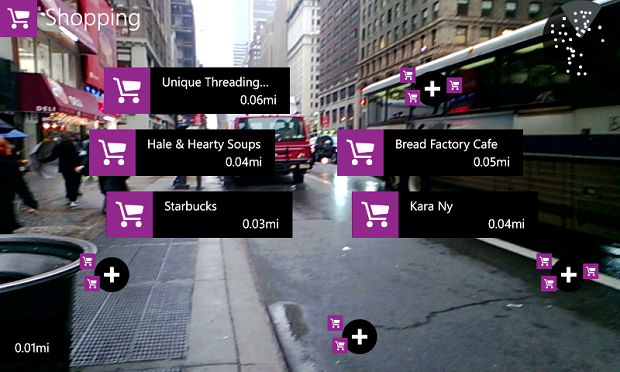 Finally, there is Nokia Music, a radio service similar to Slacker Radio, but with many more music channels and songs available. I didn't listen to all 17 million songs, so I can't give a complete account.

There's no particular reason to prefer the Nokia Lumia 810 to the 820 or 822; that decision is one to make by comparing the carriers. If you want to go with T-Mobile, the 810 is a good choice.


The Nokia Lumia 810 is an excellent, if not top-of-the-line Windows Phone available on T-Mobile. It's reasonably priced, has a top-notch camera and intriguing software, including two music apps that stream free tunes, "augmented reality" to show you what points of interest are right in front of you, and Nokia's highly-regarded maps. It also has a screen that's clearly a class or two below the best ones on the market, such as the iPhone 5. If you want a better screen on a Windows Phone, choose the Nokia 920 instead.