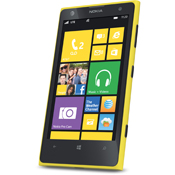 Nokia Lumia 1020
Nokia Thursday announced the Lumia 1020, a new smartphone that aims to take mobile photography to the next level. It includes a 41-megapixel PureView image sensor that offers lossless zoom, optical image stabilization and a six-lens Zeiss optics array.

The Lumia 1020 might be a smartphone that runs Microsoft's Windows Phone 8, but that's a minor detail. Nokia CEO Stephen Elop spent more time talking about the imaging technology built into the smartphone that any other aspect of the hardware.

What sets the 1020 apart is not just the massive 41-megapixel sensor, but the entire camera module. Everything about it has been ramped up to set the 1020 apart from its competitors. The camera module is mounted onto a floating optical image stabilizer that rests on tiny ball bearings. It compensates for the small movements made by hands even when the user holds as still as possible.

The Carl Zeiss optics include six separate lens elements to give the device some level of optical zoom in addition to the sensor's digital zooming. The optics also assure that images will be as sharp as possible. The sensor captures two images at a time, a 41-megapixel image for zooming and a 5-megapixel image for sharing. Nokia calls this oversampling.

In addition to the souped-up hardware, Nokia completely revised the software that controls the camera. The new app is called Pro Camera, and it uses a series of rings that appear on the screen to let users adjust every aspect of the 1020's behavior. Standard options, such as brightness, flash, focus and ISO, all can be altered quickly thanks to the new software. It also adds a new long exposure mode that can shoot 4-second images. On stage, Nokia demonstrated how the long exposure can be used to create an artistic end result. The 1020 shoots full 1080p HD video with lossless zoom. That means users can stand far away from their subject and zoom in all the way with no loss in the number of pixels being recorded.

Of course, there are other details worth considering. The device has a 4.5-inch screen with 1280 x 768 pixels. The screen is high definition, but it doesn't quite measure up to the full HD screens offered by the competition. It is an AMOLED screen with PureBlack technology for improved contrast, and it is protected by Corning's Gorilla Glass 3. The phone has a dual-core 1.5-GHz processor with 2 GB of RAM and 32 GB of built-in storage.

Nokia is offering an interesting accessory with the device that makes it look and act like a point-and-shoot camera. The accessory is a shell that attaches to the back of the 1020 that provides a two-stage mechanical shutter button, a larger grip, additional battery power, and a tripod mount. Nokia didn't say how much the accessory will cost.

The device goes on sale soon, but it will be available only from AT&T in the U.S. Pre-ordering starts on July 16 and it hits retail stores July 26. It will cost a hefty $299.99 with a new two-year agreement. It supports AT&T's LTE network. It will reach other markets later this quarter.

It is an impressive camera, no doubt, but it is hard to discern just how attractive the camera will be to potential customers. The price is a bit off-putting, considering that most competing devices are priced $100 to $200 cheaper.