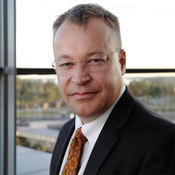 (click image for larger view)
Nokia CEO Stephen Elop
Nokia ended its search for a new CEO Friday by introducing as its new leader Stephen Elop, head of Microsoft's business division. Elop, a Canadian with broad managerial and engineering experience, will attempt to stem Nokia's slipping revenue and market share as Apple's iPhone and Google's Android have surged to the forefront of the smartphone world.

While in the Microsoft position for just two years, Elop has strong managerial experience. He was the COO at Juniper, president of Adobe's worldwide field operations, and CEO of Macromedia. Early in his career he was a systems specialist at Boston Chicken.

With some 130,000 employees and offices all over the world, Nokia has some strong assets, but they have been dwindling. Just a few months ago, Nokia's worldwide mobile phone market share was 40% -- more than the next three firms combined. The company recently has seen its sales and profits flatten and fall below predictions.

Reports began surfacing in July that Nokia was looking for a new chief executive to replace Olli-Pekka Kallasvuo, an attorney who had been CEO since 2006. Kallasvuo will leave his executive post and director's position at Nokia the day before Elop takes over on September 21. Kallasvuo will continue as non-executive chairman of Nokia Siemens Networks.

Throughout the 1990s and early 2000s, Nokia rode the European GSM standard to the top of the heap of the world's cell phone universe, although it never made much of an impact in the United States, where its market share remains below 10%. Elop's North American experience may help the company crack that market.

Elop's ascension takes place as Nokia is releasing an important entry in the smartphone sweepstakes, its N8 handset. The N8 comes with strong digital camera and social networking features. Nokia's E7, scheduled to debut this month, is another smartphone entry, predicted to be more advanced than the N8.

Elop's biggest problem, however, will be competing with Apple's iPhone and a brace of Google Android phones, devices that have blindsided traditional mobile phone providers like Nokia and Motorola. A key for Nokia will be to enhance its Ovi applications operation to compete with the app stores of Apple and Google.

Elop's position with Microsoft raises immediate speculation about a closer relationship between Nokia and the software colossus, which is said to be preparing to launch its new mobile phone products next month. Elop worked closely with Nokia during his Microsoft tenure, according to published reports. Many Microsoft features like Windows Live Messenger and Hotmail have been built into Nokia phones.

Jorma Illila, Nokia's chairman and ex-CEO, pointed out that Elop has "a strong software background and proven record in change management."