One Lousy Day So Far With iOS 6

iOS 6 might turn out to be a great product, but Apple has released it half-baked. The screwed-up Maps is only the most obvious, sometimes funny, example.
Larry Seltzer
Contributor
September 21, 2012

My "upgrade" to iOS 6 has left me an unhappy customer. Some things don't work and some things work badly. Nothing about it is meaningfully better for me. I hate the soap opera aspects of industry coverage but, like a lot of people, I have to wonder if Steve Jobs would have let a product in this state out the door. Apple CEO Tim Cook's effort to "[double] down on product secrecy" seems more about avoiding product testing than preventing press leaks. 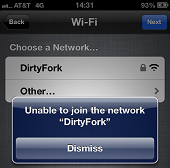 Busted Wi-Fi.
The most famous part of this is the poor quality of the new Maps app. The Wall Street Journal Friday said, "Apple Inc.'s move to replace Google Inc.'s mapping software with its own on its mobile devices sparked a world-wide consumer backlash, marking a rare strategic blunder by a company more accustomed to rave reviews from users." It's not just me.

The biggest problem for me remains my inability to access my Wi-Fi network. As usual, the community at discussions.apple.com is confused and unhelpful. I'm a professional tester and I'm very good at finding bugs, but it's been way too easy with iOS 6. 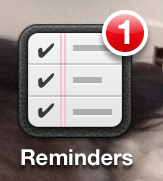 The phantom Reminder.
One of the first problems I noticed on the Home screen was the Reminders app, the icon for which is nearby. I presume the "1" on the icon is supposed to indicate that there is 1 reminder in there, but I've opened it many times and can't find anything. I've added and deleted reminders. The "1" won't go away.

Then there's the App Store. There are some design changes in it that I do like: When you start downloading and installing an app update, instead of throwing you back out to the home screen to find the apps that are updating, it keeps you on the Updates page and shows the status of each app. You can even see "What's New" in the update. 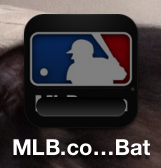 App crashes mid-update.
It would be better if the updates worked properly. Nearby you can see what happened to the icon for the MLB.com app, the update for which never quite finished. Several times I've seen apps get stuck at the "Downloading" phase for a really long time. It's not clear if it's broken or just really slow. Right now the whole service is painfully slow; it's fair to expect it be heavily taxed at the moment because so many apps are being updated for the new OS, but it's Apple's responsibility to keep the system functional even under heavy load. I'm not especially sympathetic.

The same speed problem affecting the App store goes for the Maps service. Of course a lot of people are playing with Maps right now, but they should be able to. Using Maps Thursday night I spent long times with gaps in the satellite photo drawing. And the program is sucking battery at an alarming rate. 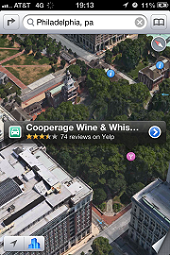 The nonexistent bar behind Independence Hall.
The Web is filling with examples of data and image errors on the Maps, many of the "Dali-esque." Consider the flattened Eiffel Tower below. But my favorite is the nearby image of Independence Hall in Philadelphia. There's a park behind it, but Apple's Maps show a bar there. That particular bar is a couple of blocks away. In my slide show I pointed out a problem with a gas station in my town being mislocated; it turns out that gas stations are a general problem for the Maps. Search Twitter for "Apple Maps gas station" for some funny stuff (like "Not even Chuck Norris can find a gas station with iOS 6 Maps").

I've tried to get a sense, after one day, of whether battery consumption is any better or worse than the "heavy" rating I would give the iPhone 4S on iOS 5.1. After one day I'd say it's certainly no better. Playing with iOS Maps I found myself drawing battery power down precipitously, but maybe it was like that on iOS 5. It's also worth noting that my battery is almost a year old and, as I understand it, iPhone batteries start dying off in 12 to 16 months. Unlike on my MacBook, there is no way to check the number of power cycles on an iPhone battery without jailbreaking and I'm not going to do that.

There is a lot in iOS 6 I haven't even looked at, but much of that (like Stocks and Newsstand) are apps I never bothered with in previous versions. I also haven't seriously looked at Passbook yet, but because I use a lot of different devices I'd be inclined, for my personal use, to use a mobile wallet that is less proprietary, so that my data in it would be accessible on non-Apple devices.

It's too late for me, but the rest of you should hold off applying the update for now. I know my own iPad won't be getting it until I know how to get around the Wi-Fi problem. 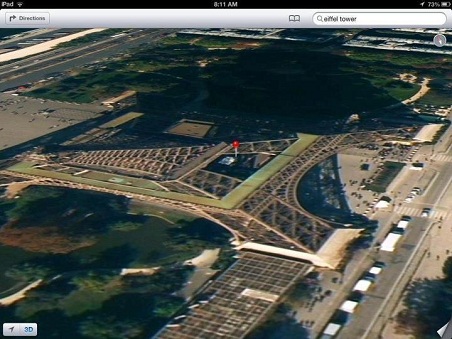