Application-centric firewall allows clients to determine dynamically what the closest, fastest connection to the enterprise is and establish an encrypted tunnel to that branch office.
Larry Seltzer
Contributor
November 07, 2011

Palo Alto Networks is known for firewalls which protect all TCP ports and look for application context on them. As computing has moved to HTTP and other Internet protocols, enterprises have found it necessary to open up certain ports, like 80 (HTTP) and 443 (SSL), in order to make management practical. In fact just about any application can run on just about any port, so Palo Alto Networks allows administrators to focus on managing users and applications, no matter what port they use.

The system has a lot in common with conventional VPNs and firewalls, but allows much more flexible control over application access to IT, and policy is enforced no matter where the client is or how they connect.

Performance can be a problem when the client relies so heavily on one connection to the firewall, so GlobalProtect clients are able to determine if there is a company branch office which is a closer, better performing connection. Any Palo Alto Networks perimeter device at a branch office in the company WAN can service remote client connections. This is sometimes known as "cloud firewalling" or a "cloud of gateways." 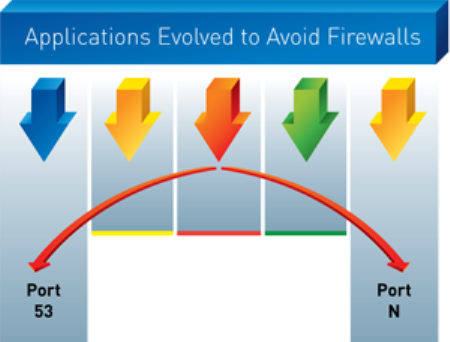 Palo Alto Networks firewalls go beyond port management to look for application context on all ports.