Research In Motion demonstrated the next release of its BlackBerry PlayBook operating system at CES. Check out our video for a peek at native email and calendar apps, an Android player, and user interface improvements.
Fritz Nelson
Vice President, Editorial Director InformationWeek Business Technology Network
January 12, 2012 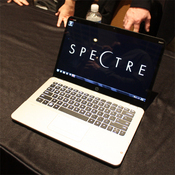 Ultrabooks Dazzle At CES
(click image for larger view and for slideshow)
Research In Motion began talking about PlayBook OS 2.0 in the second half of 2010, and shipped a beta developer kit in October. At CES this week, RIM began showing it off. It includes a few of the missing native apps (email, calendar, and contacts), but it also includes a unified inbox, the integration of social media with calendar, contacts and email, the much-awaited Android player, and enhanced Bridge functionality that includes remote control. It's still on track for February release.

The video embedded below gives a fairly thorough view of all of the major end-user changes, including a running Android app. Shaun Coghlan, BlackBerry PlayBook senior product manager, said there will be thousands of Android apps available when PlayBook OS 2.0 ships.

Among the changes: The main PlayBook user interface no longer contains pre-set tabs for apps; users can customized their own panes to organize apps. You can also create folders by dropping apps on each other . . . you know, like on iPads.

The PlayBook email app includes a universal inbox, and that includes not just different mail services but also social feeds. The email client looks much more intuitive compared to using BlackBerry email over the Bridge function. RIM is also leveraging the PlayBook's multitasking in email, letting users compose multiple messages at once directly in the client app, and then with an easy swipe, move between them and opened messages. Email also includes an HTML editor for richer message creation.

RIM is taking this whole social integration thing pretty seriously. For instance, in the calendar app, instead of just listing meetings and appointments, there are things like a "people view" so that you can see who you're meeting with, and then drill into information about them from your contact app, including things like recent Tweets, and the ability to directly video chat with them if they're available. That's in addition to information on meetings you've had with the person in the past.

Finally, RIM has made some changes to Bridge. For instance, there's a remote control app for the BlackBerry phone, and you can take over and control the PlayBook. You can even use swipe gestures as if the phone is a PlayBook. I'm a little dubious about the practicality of this, although it could be a good way to control a PlayBook connected to your TV (admittedly, I haven't used my PlayBook that way yet).

InformationWeek is conducting our third annual State of Enterprise Storage survey on data management technologies and strategies. Upon completion, you will be eligible to enter a drawing to receive an Apple iPad 2. Take our Enterprise Storage Survey now. Survey ends Jan. 13.