RIM turns to the "Bold" team of superheroes in its latest marketing push. But the Saturday-morning-style characters probably won't appeal to anyone other than Disney Junior fans.
Eric Zeman
Contributor
January 31, 2012
RIM's attempts at marketing its smartphones have been somewhat hit or miss over the years. Its latest idea--even if it never leaves the bowels of the Internet--is a certain "miss."

Kicking off the new year, RIM wants everyone to "Be Bold." It used a marketing campaign in New York City on New Year's Eve to kick off the Be Bold campaign, encouraging its customers to take command of 2012 and, well, to be bold. That's cool, I can dig it.

Following the New Year's Be Bold pitch, RIM has created "The Bold Team"--four cartoon characters that are "bravely stepping out of 2011 and into 2012 filled with unlimited possibilities." I have one possibility here for you, RIM: you'll be the laughingstock of the boardroom, conference room, and pretty much any other room if these characters are actually put to significant marketing use.

There are four members of the Be Bold team: 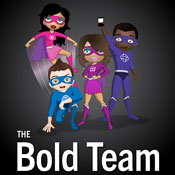 (click image for full view)
-- GoGo Girl, The Achiever, is "saving the day with a brilliant strategy, a smile, or a spatula. She's clever, resourceful, and just a bit random." Did you really just misplay the gender card that badly, RIM? A spatula? Are you kidding?

-- Max Stone, The Adventurer, is "able to jump out of a plane and land on a moving speedboat. He's tough, proud, and a little wild. You can count on Max to face any challenge." Right, Superman in RIM Champion form.

-- Justin Steele, The Advocate, is "always ready to stick up for his friends. His hobbies include saving cats stuck in trees and using social feeds in his spare time." Wow, cats? The Internet has never heard of those before. Tapping a meme much?

-- Trudy Foreal, The Authentic, is "Not afraid to call it as she sees it. She enjoys long walks on the beach and old-school ninja movies." *Groan*

RIM hasn't said if or how it plans to use these characters other than attach them to an infographic about BlackBerry users. I can tell you this, they might be able to grab the attention of Disney Channel and Nickelodeon fans and other too-young-to-buy-smartphone consumers, but they're not exactly the type to help sell tens of thousands of Bolds to enterprise customers.

RIM's new CEO, Thorsten Heins, has promised at least some change will occur within the BlackBerry maker. Let's hope that change comes sooner rather than later.

UPDATE: RIM issued a clarification stating that this infographic is nothing more than an playful representation of some data points, and not part of a new advertising campaign.