Research In Motion's updated smartphones will excite enthusiasts, but won't solve the company's long-term problems.
Eric Zeman
Contributor
August 03, 2011
RIM desperately needs to get some new hardware on store shelves. Its current lineup of BlackBerrys is aging rapidly, and in the face of the Android invasion, RIM needs new phones. Wednesday, it introduced two new devices and re-announced a model first shown off earlier this year. All three will be sold as "4G" devices by AT&T starting later this month.

First up is the BlackBerry Torch 9810. The 9810 is a warmed-over version of the Torch 9800, which was announced almost exactly a year ago. The 9810 has the same vertical slider design as its predecessor with both a touchscreen and a physical QWERTY keyboard. It is a compromise meant to please those wanting a touchscreen but needing real buttons to press.

It boasts the usual assortment of smartphone essentials, including a 5-megapixel camera with 720p HD video capture, 1.2-GHz processor (twice as fast as last year's model), Wi-Fi, Bluetooth, GPS, and 8 GB of built-in storage for media (and those work files you're supposed to update for the boss). The screen measures 3.2 inches and the resolution has been bumped from HVGA (320 x 480 pixels) to VGA (480 x 640 pixels). RAM has been bumped from 512 MB to 768 MB. It will be sold exclusively by AT&T, and can access AT&T's HSPA+ "4G" network at a maximum of 14.4 Mbps. All these hardware improvements were much needed.

It will run BlackBerry 7, which was announced earlier this year. BlackBerry 7 is an update to BlackBerry 6, though RIM claims it is a much better and faster platform. It will also ship with BlackBerry Messenger 6, which has been endowed with new social powers.

Next up is the BlackBerry Torch 9860/9850. This is a re-imagined version of the BlackBerry Storm. The Torch 9860/9850 features a huge 3.7-inch touchscreen with 800 x 480 pixels. It does away with the Storm's SurePress clickable screen, and instead uses a traditional capacitive display--which means you'll have to type those emails and BBMs on a glass screen. It features the same 5-megapixel camera with 720p HD video capture, 1.2-GHz processor, Wi-Fi, Bluetooth, and GPS as the Torch 9810. It has less onboard storage--4GB--but that can be expanded to 36 GB with the addition of a 32 GB microSD card. 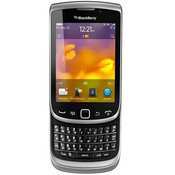 BlackBerry Torch 9810
The Torch 9860/9850 comes in two basic wireless configurations: one supports the CDMA networks of Sprint and Verizon Wireless, and the other supports the GSM-based networks of AT&T and T-Mobile. The CDMA version is a world phone, meaning it can be used on Sprint/Verizon's networks in the United States, as well as the 3G networks over in Europe. The GSM version will come in two slightly different versions, one to support AT&T's 3G network and another to support T-Mobile's 3G network.

Last, RIM reminded everyone about the BlackBerry Bold Touch 9900/9930. This device was first announced in May at BlackBerry World. It is a more traditional BlackBerry with a portrait QWERTY keyboard, but enhances the display with touch capabilities. It shares many features with the 9860/9850 and the 9810.

Pricing for these handsets was not announced.

Are these solid, enterprise-grade smartphones? Yes, absolutely. Will they make millions of BlackBerry users happy? Of course they will. Can they solve RIM's long-term problems? No, no they can't. Here's why.

All three of these devices are incremental improvements to earlier designs, a fault for which RIM has become famous. The Torch 9810 is a warmed-over 9800. The 9860/9850 is a refreshed Storm. The Bold Touch 9900 is a modified Bold. Nothing about these devices is new and innovative--and innovation is where RIM has failed.

In the face of Android and iOS--both of which have innovated at light speed--RIM needs to re-realize its smartphone vision. It is (hopefully) doing that with its future QNX-based BlackBerrys. But we're six or more months away from seeing any QNX BlackBerrys. RIM has said that they won't arrive until the first quarter of 2012. Until then, RIM has to fill the gap with something, and that's why we see the three BlackBerrys announced today.

RIM has taken the lazy man's approach in order to have something sitting on the shelves of its wireless network operator partner's stores for the next six months. It refreshed existing form factors, bumped up the specs, put some spit and polish on the user interface, and hopes no one will notice that these are the same old phones.

To make a bad pun, RIM has to be much bolder with its phone designs. We can only hope that its QNX smartphones are the innovative handsets for which the BlackBerry faithful have been waiting.