Research In Motion hints at the future of the BlackBerry as it shares a hardware reference platform device with a big screen and the latest version of BB 10 operating system.
Fritz Nelson
Vice President, Editorial Director InformationWeek Business Technology Network
September 25, 2012
Finally, Clewley talked about BlackBerry 10 being a "communication experience," and how it's about transitioning from an "I" experience to a "we" experience. Rhetoric aside, RIM is betting that BlackBerry 10 is all about how we interact and share. For instance, BlackBerry 10 plays well with social networks: Facebook, Twitter, and LinkedIn are deeply integrated into the messaging experience, along with email, voice communication, and BBM. RIM is calling this universal, integrated messaging experience "BlackBerry Hub," perhaps borrowing a page (or a name) from Microsoft Windows Phone. It will be interesting to hear what Microsoft has to say about this. 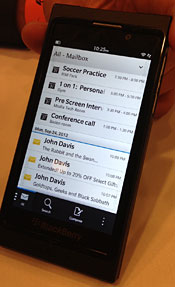 A Hub for communications.

From within this hub, you get what Clewley called a 360-degree experience. For example, if you pull down from the top of the inbox, you can suddenly see upcoming calendar appointments. And if you click on the people tab from the calendar, it shows who was invited, messages associated with the appointment, and so on. This contextual approach is similar to what we've seen on the BlackBerry Playbook, but at a surface glance it seems even more tightly integrated into the user experience. Or, as Clewley stressed, users don't have to exit one task to access the next logical one.

It's a compelling approach, but time will tell if it's a game-changer. There is plenty in BlackBerry 10 that could be considered table stakes--necessary for the modernization of the BlackBerry experience, but old hat by now.

For example, RIM demonstrated a retooled BlackBerry App World, complete with music and video content, and talked about social games, courtesy of its acquisition of ScoreLoop. The camera app has the ability to time-shift (finding the perfect picture from essentially a few seconds of video capture). The touch keyboard has what looks like a nifty predictive capability, but I'm not sure it's any better than what's in the latest version of Android. These aren't nearly enough, but they're good.

Since RIM has continued to push BlackBerry 10 off into the future (it was originally slated for late 2012), working to perfect it rather than hasten an imperfect re-entry, there's still the chance that other mobile OSes will pass it by. Even Windows Phone 8 will be out months before BlackBerry 10, and there are already signs that Microsoft has thoroughly thought through the enterprise experience (for a more in depth look at what Microsoft is up to, generally, download our Windows 8 Survival Guide).

This week's BlackBerry Jam is something of a culmination of RIM's efforts to woo developers year-round. The company has been conducting "Jams" around the world, and claims that they've been quite popular--RIM added 10 additional cities (to the 20 originally scheduled) between May and now. And earlier this year, RIM guaranteed developers that their applications would earn at least $10,000 in the BlackBerry App World, or RIM would cut them a check for the balance.

In other words, RIM needs developers, or else all of the best hardware in the world, and all of the greatest user experience tricks in the universe won't save it. This week, RIM will give developers more BlackBerry 10 to work with--the home screen experience, the App World functionality, flow (but the Hub APIs, while available, will not be part of the phone experience yet). Undoubtedly RIM will try to inspire developers with more promises and guarantees.

We'll see if it's enough.