More than just an external battery, the myCharge Summit 3000 can handle up to three devices at once. It comes with the connectors you need built-in, and can even sync your iPhone, iPod Touch, and iPad.
Larry Seltzer
Contributor
August 29, 2012

If you carry mobile devices you always have to be concerned about running out of power. Are you going to have a chance to charge? Especially with a battery hog like the iPhone 4S it's easy to run short. For the iPhone there are device-specific battery cases that extend life; we reviewed a bunch of them last year.

But I carry multiple devices and I want a solution that works for any or all of them. I've found a really good candidate: Lately I've been testing the myCharge Summit 3000. It's a portable battery pack with a 3000 mAh battery that charges just about anything. (For comparison, the iPhone has about a 1400 mAh battery.)

The Summit 3000 comes with male USB, MicroUSB, and Apple 30-pin connectors, and I could charge three devices at once with it. The Apple connector is a 2.1 amp connector required by the third-generation iPad. The Summit itself can be charged through a female USB port or the built-in two-prong wall plug. According to myCharge, charging the Summit 3000 through the wall plug takes two hours, and using the USB port takes 5.5 hours.

Plug any of the connectors in and the Summit 3000 will tell you what happened. A female voice will say, "Powering on, charging Apple device," or "Powering on, charging power bank," or some other appropriate message. Voice messages are available in English, Spanish, French and Portuguese. The device can be set to notify with simple tones instead.

myCharge claims that the 3000 mAh battery will extend device life by up to 335 hours of standby, 13 hours of phone use, 67 hours of music play, 15 hours of Wi-Fi usage, or 17 hours of video playing.

The Apple connector is smarter than the others. When you connect an Apple device to the Summit 3000 and then connect the Summit to the computer through the USB port, you can sync the Apple device. Syncing is not supported for standard USB devices. 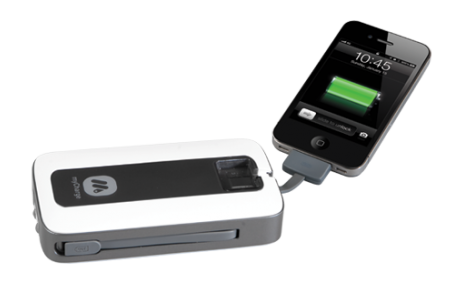 It's worth noting that you can get battery packs something like this for a whole lot less, and if you're really tight on money that might be the right thing for you. For instance, Monoprice has 3000 mAh and 5000 mAh battery packs in roughly the same form factor as the myCharge models, for just $16.02 and $28.95, respectively.

This is a fraction of the cost of the myCharge, but the Monoprice devices pale in comparison to myCharge on a feature basis. The most obvious difference is that the myCharge comes with the cable heads attached, a major convenience, although the Monoprice comes with separate cables. The Monoprice has two USB output jacks, one at 1.1A and the other at 2.1A. The Summit 3000 can charge up to three devices at once and still sync an Apple device.

Only the Apple connector on the myCharge can provide 2.1A--required by the third-generation iPad--and the other plugs output 1.1A. The myCharge comes with a standard two-prong wall plug, making charging more convenient, while the Monoprice is charged through a microUSB port; a side effect of this, as noted in some of the customer reviews, is that it charges very slowly.

In short you get what you pay for. Whenever I've used this device in public people have asked me about it and said, "Cool!" The myCharge Summit is a high-price model, but mobile device users have demonstrated over and over that they are willing to pay a premium for well-implemented, easy-to-use products. The myCharge Summit 3000 fits that description.


More than just an external battery, the myCharge Summit 3000 can handle up to three devices at once; allows iPhone, iPod Touch, and iPad syncing; and comes with the connectors you need built in. It costs a lot compared to simpler alternatives, but you get what you pay for and the Summit 3000 makes managing your mobile devices appealingly convenient.