Samsung Galaxy Note: A Phone And Tablet In One

The Galaxy Note from Samsung, available in the U.S. only from AT&T, breaks new ground. It's not just a large phone with a big, beautiful screen like the Droid Razr. It adds a stylus that makes annotation and new application types possible.
David Chernicoff
Contributor
April 30, 2012

A GSM world phone with a dual-core CPU, LTE connectivity, and HD video support? Sounds like a winner. But when you add a 5.3-inch screen it suddenly becomes a question mark in the eyes of many cell phone users. That pretty much defines the first impression people seem to have of the Samsung Galaxy Note, available in the U.S. from AT&T as the SGH-I717.

Unveiled at last year's CeBit show in Germany and released in the U.S. in February, the phone has garnered generally good early reviews--except for its size. The phone falls between the Samsung Galaxy S II 4.3-inch phone and the 7-inch Galaxy Tab tablet. But rather than feeling like a small tablet, the Note feels only slightly bigger than the Galaxy S II, which is the number-one selling Android smartphone (see below). And it would seem that customers aren't being put off by the big screen--Samsung said over 6 million units had been sold worldwide in 2012 Q1. 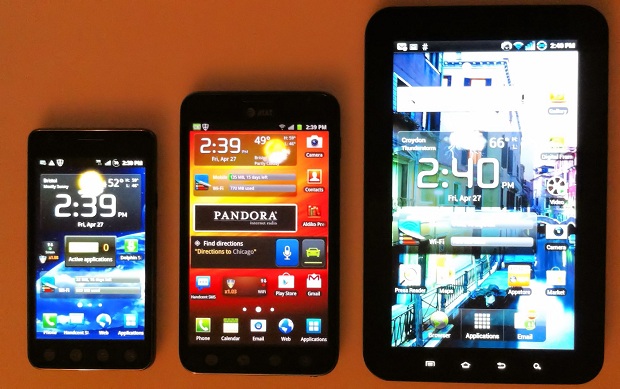 The phone fits easily in a shirt pocket and can be used with one hand. Granted, I can palm a basketball, but even someone with average hands should find it fairly comfortable with some practice. And that larger size does get you a 5.3" 800 x 1280 Super AMOLED HD display, which--beside being able to display 720P HD without resizing--offers a very bright and detailed screen for other apps, including those that can make use of stylus input.

If you're a current Samsung Android phone user, especially if you are coming from the Galaxy S or S II, you'll feel right at home with most of the software that comes with this phone. It's the same current-generation of phone apps that have received excellent reviews. What the Note brings new to the table is the S Pen stylus. 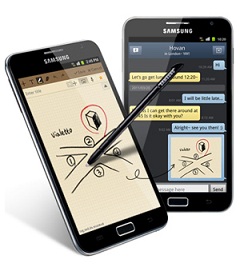 Along with the unique ability to annotate just about anything that the phone can produce, the S Pen software makes taking notes very simple. The S Memo application is a full-featured note taker, and since the release of the Pen SDK last November, a number of S Pen-enabled apps are now available in the Market that let you do everything from artistically draw to play games.

The stylus does what you would expect on a tablet that accepts pen input: you can take notes, convert your handwriting to text, capture screens and annotate them, open Office and PDF files (in the included Polaris Office application), and annotate using the pen. It can be used to simply navigate through applications; it's like a fingertip only with significantly more precision, which can be incredibly useful when doing many tasks, including browsing through link-laden websites. The S Pen stores easily in the base of the phone, though if you choose a bulky case, it can be difficult to extract.

The phone also features a new registration and configuration process. The first thing experienced Android user will notice is that the phone doesn't automatically boot into the Android sign-in screen, which would normally configure the Google Apps on the phone, register the device with Google, and make the Android market (now known as Google Play) available. Instead, the user is made aware of the option to register the phone via a message on the drop-down notification screen. Clicking this message launches the AT&T Ready2Go app, which walks you through using your desktop computer to configure your new phone. From your desktop the nine-step process lets you configure your Gmail account, set up social networking, add additional contacts, select your wallpaper, install a few free apps that AT&T provides, select browser bookmarks from a list of sites, configure your home screen widgets , set your ring tone, and configure access to your Wi-Fi network.

Or you can just launch any of the Google connected apps on the phone, such as the Market, and you will be walked through the standard Google registration process with which you may already be familiar.

You can't have a review without getting into the device hardware and technologies, so let's take a look at the specs:

The Philadelphia area, where I am, does not yet have AT&T LTE deployed. But the Note was able to reach download speeds up to 11 Mbps with the fallback HSDPA 21+, which compares favorably to the Verizon LTE performance of up to 12 Mbps I get at my office.

For work, I had no trouble connecting the Note to my Exchange Server account, and it is one of the first two Samsung phones (the other is the Galaxy Nexus) to be Samsung Approved for Enterprise (SAFE) certified. SAFE means the phone can by managed by mobile device management consoles that support the SAFE API set provided by Samsung, and that the phone comes with the ability to use a VPN to access a corporate network. The size of the screen makes reading existing documents (and even annotating them), much easier than on any other traditional cell phone, and content creation tasks are also made simpler.

With a 5.3" display, the Note is also a great replacement for 7-inch tablet e-readers; text in all of the common eReader applications I used was easy to read. The difference between the Note and 7" devices was barely noticeable. One reason for this is that almost all 7-inch e-readers have a lower resolution than the Note--generally 1024 x 600. For the serious geek who is concerned about the PenTile display, the HD Super AMOLED display shows none of the artifacts that lower-resolution displays used to suffer from to the point of pixel peeping.

The Samsung Galaxy Note SGH-I717 is $299 with a two-year contract from AT&T. Amazon sells it for $229, and price matching with Amazon is at the discretion of your local AT&T store.


The Galaxy Note from Samsung, available in the U.S. only from AT&T, breaks new ground in the mobile space. It's not just a large phone with a big, beautiful screen like the Droid Razr. It adds a stylus that makes annotation and many new application types possible.