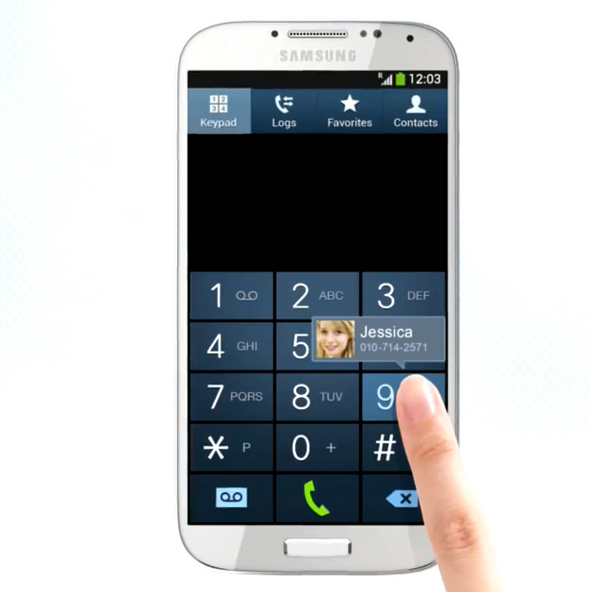 Samsung has packed so many new features into the Galaxy S 4, its newest flagship smartphone, it's a bit mind-boggling. Even after several days of testing, I was still finding new additions, such as the ability to add and customize the settings that appear from the notification screen, and some of the new content-sharing mechanisms between Samsung devices.

If you're in the market for your next smartphone, the Galaxy S 4 should be near the top of your list. Its screen is slightly larger than its predecessor's, the Galaxy S 3 (5 inches vs. 4.8 inches), and yet the phone is roughly the same physical size, a bit lighter and slimmer, even. Its screen resolution has been beefed up in a meaningful way, to 1080 by 1920 pixels and 441 pixels per inch. And it boasts a quad-core 1.9-GHz processor under the hood.

But there's much more magic in the Galaxy S 4 software. Some of it was a little quirky, some of it a bridge too far, but most of it got me pretty excited about the future of smartphones.

I picked some of my favorite Galaxy S 4 features, and in the slideshow that follows, I'll try to give you a glimpse of how they work (or didn't in one case), or at least how they look.

It's a bit difficult to show some of the air gestures -- such as the ability to wave your hand up or down, left or right to scroll through pictures, flip between browser tabs or scroll up and down a Web page. And it's a bit difficult to show smart scrolling, where the phone is seeing the tilt of your head as you read, and scrolling up and down automatically in accord. But those were also among my favorite features once I got used to them.

I included one camera feature, called dual shot, but not because it was my favorite. This feature lets you take a picture using both the front and rear-facing cameras. I got the feeling Samsung added this mainly because it could, and to see what people do with it. I couldn't think of much of a reason for using it, other than to goof around.

With S Translator, S Health, and the combination of IR Blaster and the WatchON app -- a universal remote for your television and DVR -- Samsung is trying to make the Galaxy S 4 an even more invaluable companion in your life. Combined with Google Now and Google Maps, and all of the usual features built into Android and available from the Google Play store, it's going to be difficult to untether yourself from this device. Now dig into our slideshow.