Samsung packed the Galaxy S 4 with new features, but here's what we wanted and did not get.
Eric Zeman
Contributor
March 15, 2013 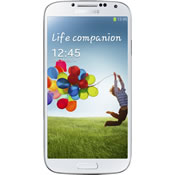 Some of those features have whimsical names, such as Air Gesture, Drama Shot and Story Album, which will let Galaxy S 4 owners do all sorts of creative and productive things with the smartphone. Perhaps the most appealing new capabilities are the Dual Shot and Dual Record features, which allow users to take pictures or shoot video using the Galaxy S 4's front and rear cameras at the same time.

Although the Galaxy S 4 has a lot going for it, Samsung didn't quite include the kitchen sink. Here are a few things Samsung should have considered when designing the Galaxy S 4.

The Galaxy S 4 is made of plastic, just like its predecessors. The Galaxy S 4 looks almost identical to the Galaxy S 3. In fact, at an arm's length, it is nearly impossible to tell the Galaxy S 4 from the Galaxy S 3. Rather than take a chance with a fresh design, Samsung trod familiar ground. After all, why mess with a good thing, right? The Galaxy S 3 has sold close to 50 million units worldwide, making it one of the most popular devices around the globe. It would have been nice to see a break from Samsung's current design, but Samsung chose to play it safe.

The larger display of the Galaxy S 4, although beautiful, can be awkward to use. Its large size means owners will need to perform some palm and finger gymnastics to use the phone without dropping it. Two years ago, the Galaxy S 4 would have been called a phablet. Despite bringing over the Galaxy Note II's Air View feature, the Galaxy S 4 often requires two hands. The Galaxy S 4 doesn't have a stylus, either.

The Galaxy S 4's battery is 25% bigger than its predecessor's. At 2,600 mAh, we might expect it to outlast the 2,100 mAh battery of the Galaxy S 3. Samsung, however, made no commitments to longer battery life. The bigger screen, faster processor and more powerful camera are all items (not to mention the huge number of apps/services that will run in the background) that will drain the battery more quickly. The larger battery could be there to help offset the power-sapping of these new features while keeping battery life at about the same level. On the plus side, the battery is removable and can be swapped, something many of today's phones cannot do.

These are but small quibbles about an otherwise impressive device. Samsung will no doubt sell as many Galaxy S 4s as it did Galaxy S 3s.