Samsung Goes On Offensive Against iPhone 5

Samsung releases attack ad pitting the Galaxy S III against the iPhone 5. Parodies of the ad are quickly conjured up by Apple and Nokia fans in response.
Eric Zeman
Contributor
September 17, 2012

iPhone 5's 10 Best Features
(click image for larger view and for slideshow)
Samsung rolled out an advertisement over the weekend that puts its own flagship smartphone head-to-head with the iPhone 5. The ad, titled "It Doesn't Take A Genius," offers a spec-for-spec comparison between the iPhone 5 and the Samsung Galaxy S III.

The ad lists about a dozen different features offered by the iPhone 5 and then matches them up with the relevant features of the GS3. For example, Samsung points out that although the iPhone 5 has a 4-inch 1136 x 640 pixel screen, the GS3's screen measures 4.8-inches and has 1280 x 720 pixels. Samsung also touts the GS3's 2GB of RAM as superior to the iPhone's 1GB of RAM, and of course the GS3's standard micro-USB port is better than the iPhone's "totally different plug."

Samsung lists another dozen or so features that the GS3 has that the iPhone 5 does not, such as NFC, Share Shot, removable battery, and so on.

The title of the ad itself is a poke at Apple's Genius Bar, which are the customer help centers at Apple retail stores. It also suggests that if forced to choose between the iPhone 5 and the Galaxy S III, the choice is an obvious one.

Apple fans responded by creating their own version of the same ad. The Apple-fan-generated ad's title is "Don't Settle for Cheap Plastic", a reference to the GS3's inexpensive materials. The iPhone 5 is made from aluminum and glass. Apple fans also rehashed the list of specs for comparison, and were more generous with the iPhone 5's features.

Perhaps even more interesting, Nokia fans also parodied the Samsung ad with their own, pitting the iPhone 5 against the Lumia 920. Nokia fans entitled their ad "Flyweight Contender, Meet the Heavyweight Champion." The list of specs for the Lumia 920 are plentiful, though I'm not sure it was the best move to show that the iPhone 5 weighs 3.95 ounces while the Lumia 920 weighs 6.53 ounces. 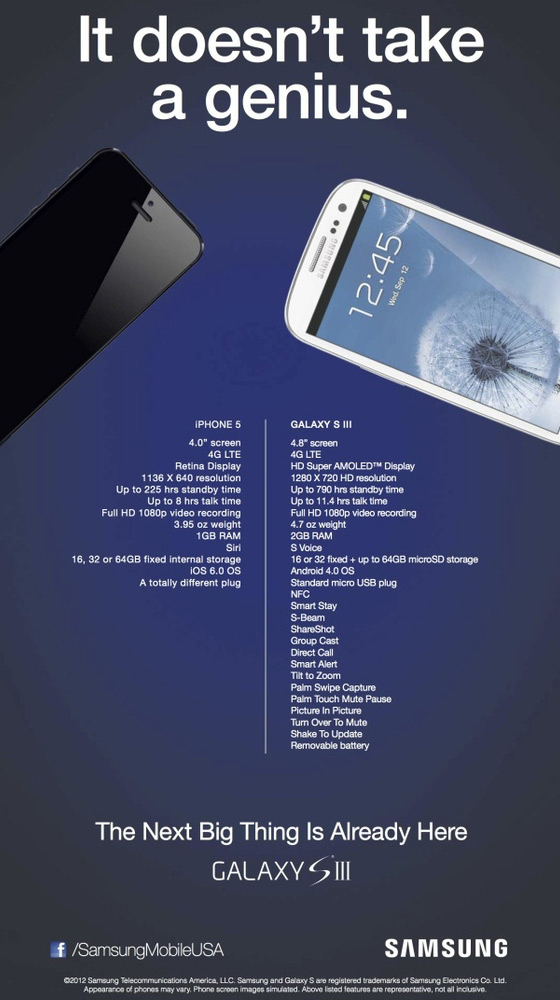 Too bad all these ads miss the point.

Comparing spec sheets is about the dumbest way to judge if one device is better than another. What really matters is how the device performs day in and day out, and whether it does what the owner wants it to do. Beyond performance, there's the overall experience to weigh, which can't be ascertained by looking at a spec sheet, not to mention user preference.

Yes, Samsung, the GS3 outguns the iPhone 5 in some specs, as does the Nokia Lumia 920 and probably two dozen other devices. Better specs don't always make for a better device.