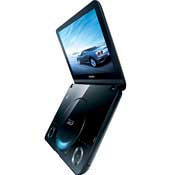 Samsung has introduced a 3D portable Blu-ray player and three 3D plasma televisions, including a $1,020 model for budget-conscious shoppers.

The BD-C8000 player delivers 1080p high-definition video through a 10.1-inch screen. The portable device includes built-in Wi-Fi and can operate for three hours on a single battery charge, Samsung said in announcing the new products Wednesday.

The player provides 3D playback when connected to a 3D-capable TV through an HDMI 1.4a port. The HDMI specification enables content in 3D format, including Blu-ray, to be transferred between devices. All 3D content requires the viewer to wear special glasses in order to see the effect.

A major difference between the least expensive TV and the other sets is screen resolution. The PN50C490 plays 720p high-definition video, while the other two play 1080p HD video.

Finally, Samsung also unveiled its largest 3D TV to date. The UN65C8000 has a 65-inch LED display and is Wi-Fi ready. The set also supports Skype, the Internet-based video-conferencing service. The UN65C8000 has an estimated selling price of $6,000 and is available this month.

Samsung started mass production of 3D TV screens in January, making an expensive bet that the technology would catch on with consumers.

While the amount of 3D content available today is sparse, the increasing amount of 3D games and movies is helping to boost sales. Market researcher DisplaySearch predicts shipments of 3D TV will reach 3.4 million units this year, up from 214,000 units last year.