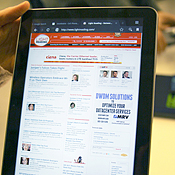 Slideshow: Samsung Galaxy Tab 10.1
(click image for larger view and for slideshow)
Several weeks ago, a Samsung executive expressed concern about how the iPad 2 outclassed its Tab 10.1 device that was announced in February. On Tuesday, Samsung revealed a new version of the Tab 10.1 that's thinner (8.6mm) and lighter than the iPad 2. Samsung's new 8.9-inch tablet is no slouch, either. It, too, is just 8.6mm thick. They weigh 1.31 pounds and 1.04 pounds, respectively. The iPad weighs in at 1.33 pounds.

Both of the new tablets share a number of features. They each run Android 3.0 Honeycomb and support HSPA+ network speeds of up to 21Mbps, as well as Bluetooth and Wi-Fi 802.11a/b/g/n. They will come bundled with an array of enterprise-friendly features, such as software from Cisco, Sybase, SAP, and Citrix. Both are powered by dual-core 1GHz processors. The Galaxy Tab 10.1, boasts 1280 x 800 pixels in its WXGA TFT LCD display. It's a shame Samsung hasn't figured out how to stretch its Super AMOLED displays up to that size.

Both of the new tablets have 3 megapixel main cameras and 2 megapixel user-facing cameras for imaging and video chatting. They can record video in 1080p HD, though not in 3D.

The new Tabs will be stuffed full of Samsung entertainment software, including its Readers Hub, Music Hub, and Social Hub. These tools and portals give users wide access to content, ranging from eBooks to TV shows, movies, and music. Samsung's Hubs may not be as fully realized -- or have the visibility -- that iTunes does, but there is plenty of good content within.

Oddly, Samsung announced that it intends to add a new version of its own TouchWiz user interface to the Tabs, which will run on top of the Android 3.0 Honeycomb platform. It's odd because Honeycomb is a brand new user interface, and is only available on one device so far (Motorola Xoom). Samsung explains in its press release, "Samsung's TouchWiz user experience is designed with a Live Panel menu users can customize to display a variety of content on the home screen including digital pictures, favorite Web sites, and social network feeds." It will also have a new application tray that users can stuff full of their favorite apps, shortcuts, or widgets.

These two devices put Samsung on much more solid ground in the battle with Apple. They match the iPad 2's specs better, and the thin and light designs will go a long way to appease those who might have balked at the size and weight of Samsung's earlier tablets designs.

Neither device will hit the market until the summer, however, which will give Apple plenty of time to sell millions of iPad 2s (if they can sort out their supply chain issues).