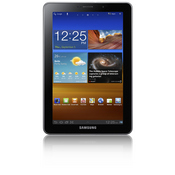 (click image for larger view)
Samsung Galaxy Tab 7.7
For the particularly picky when it comes to screen size, Samsung's got your back. With Thursday's new device announcements, Samsung offers Android devices that range in screen dimensions from 2.8 inches all the way up to 10.1 inches--and lots of choices in between.

First, let's take a look at the Galaxy Tab 7.7. This new variant of the Galaxy Tab family is the smallest in the current lineup with a screen that measures 7.7 inches across the diagonal. Its larger tablet brothers sport 8.9- and 10.1-inch displays. The Super AMOLED Plus display is particularly impressive because it boasts WXGA resolution, with 1280 x 800 pixels. Samsung says the display offers brighter colors and higher contrast.

The Tab 7.7 has a small footprint, making it more portable than some of its competitors. It is thin at 7.89 mm, and weighs in at a mere 12 oz. Despite the small size, the Tab 7.7 packs a 1.4-GHz dual-core processor; storage options that range from 8 GB to 32 GB; a 3-megapixel main camera and a 2-megapixel user-facing camera; and a massive 5100 mAh battery.

On the connectivity side, it will come with support for GSM/EDGE 2G networks as well as HSPA+ at 21 Mbps for high-speed data. It also offers Wi-Fi, Wi-Fi Direct, Bluetooth 3.0, and GPS.

It runs Android 3.2 Honeycomb and includes Samsung's custom TouchWiz user interface overlay. The Tab 7.7 will ship with a bunch of Samsung software on board, such as the Samsung Game Hub, Readers Hub, Music Hub, and Social Hub.

The Galaxy Tab 7.7 is not all Samsung had on display at IFA Thursday. While the industry had sort of settled on 5 inches as the upper limit for smartphones and 7 inches as the lower limit for tablets, Samsung is looking to mix things up. The Samsung Note Android smartphone has an enormous 5.3-inch display. 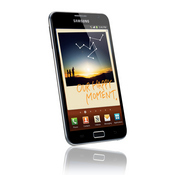 (click image for larger view)
Samsung Note
The Samsung Note shares many of the underpinnings of the Tab 7.7, which include the Super AMOLED Plus 1280 x 800 HD display; dual-core 1.4-GHz processor; and Bluetooth 3.0, Wi-Fi, and 3G radios. It will also support Long Term Evolution 4G.

The large screen size has led Samsung to approach the Note as more tablet than phone, however. The Note will come with Samsung's S Pen software and a stylus for scribbling on the screen. Samsung explains, "The incorporated digital S Pen can be used for accurate sketching and artwork, and instantly capturing ideas freely before they float away. The Note features S Memo, a multimedia application designed to record all forms of user-created content. Pictures, voice recordings, typed text, handwritten notes, or drawings can all be captured via a single application and converted to a 'memo' to be edited, annotated, and shared as desired."

Even more interesting, however, is that the screen provides enough real estate that Samsung is able to offer split-screen functionality. This means users can have two applications open at the same time, with each usable on half the screen. Samsung says this functionality is available to most of the native Android 2.3 Gingerbread applications.

Samsung is pitching both as enterprise devices, and is including a number of enterprise-friendly features, such as SSL VPN security and other business-centric software.

With both devices, it is clear that Samsung is serious about the smartphone and tablet market and is here to stay. With such a broad range of devices available, Samsung offers more choices than some of its competitors combined.

Availability and pricing was not discussed (but you probably won't be able to buy the Galaxy Tab 7.7 in parts of Europe.)