Pundits were skeptical about the Galaxy Note phone/tablet hybrid, but Samsung has sold 10 million of them. The Galaxy Note II bumps up the hardware power and battery life, updates the OS to Android Jelly Bean, and increases screen size with only a modest increase in size and weight.
David Chernicoff
Contributor
August 29, 2012

Ignoring the wailing of pundits who complained that the Galaxy Note phablet with its 5.3" HD screen was too big, Samsung instead chose to listen to the purchasing power of its customers, who have snapped up over 10 million units of the giant phone-tablet hybrid in the year since its introduction.

On Wednesday Samsung announced the Galaxy Note II, which increases the screen size to 5.5", adds a quad-core CPU, the Android 4.1 (a.k.a. Jelly Bean) operating system, a battery more than 20% larger, and an improved S Pen, all in a package that is only slightly larger than its predecessor and weighs just two additional grams. The announcement also claims 4G LTE which, if released in the U.S. in this configuration, would be Samsung's first quad-core phone here. (The U.S. version of the Galaxy S3 uses a dual-core Qualcomm SOC, not the quad-core Exynos SOC found in the international phone, in order to provide support for 4G LTE). 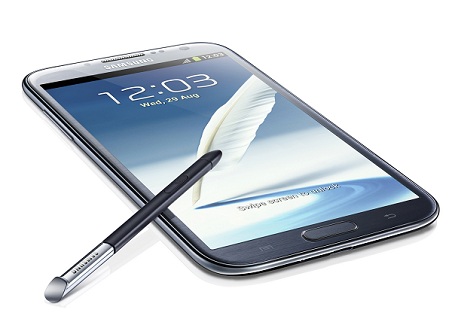 A 64GB version has been added to the lineup along with the previous 16GB and 32GB models, but here in the U.S. we never saw the 32GB unit. The cameras are still 2-megapixel (MP) front and 8MP rear and the new device has the same photo software that was introduced with the S III. In appearance, the new Note looks a lot like a giant S III, just like the original Note looked like a giant Galaxy S II. It has the same wide home button--and likely will get the two soft buttons that grace the U.S. S III, too--and gently curving lines.

But for dedicated Galaxy Note users, the most compelling feature might be the changes made to the S Pen. Not only is the pen larger and more tactile, making it easier to use, but the applications and integration with the pen have been significantly improved. For example, the act of removing the pen from its compartment will launch your favorite S Pen application. The apps also claim to be much more multitasking aware. The S Note app--now called Pop-up Note--will run as a pop-up resizable window over other applications. Samsung first introduced these Android improvements recently in the Galaxy Note 10.1 full-size tablet.

The new Air View feature allows information to be previewed when the pen is hovered over an app such as email or the image gallery, making that functionality much more useful than just having a cursor appear on the screen as it does in the original Note. And for the forgetful among us, the phone will pop up an alert to tell you if you've walked away and left the stylus behind.

This is the first phone announcement since the Apple court victory over Samsung, and it doesn't seem that the legal side is slowing down the technical innovations at Samsung. Samsung has stated that the international version of the phone will be available in October, so expect to see the U.S. version around the end of 2012. It's rumored the 3G model will start at around $800.