SEARCH
A minimum of 3 characters are required to be typed in the search bar in order to perform a search.
Announcements
Report
How does your salary stack up? 2022 IT Salary Survey Results Revealed
Event
Learn about the latest technologies that are revolutionizing identity governance and access management
PreviousNext
Mobile Devices
2 min read
News 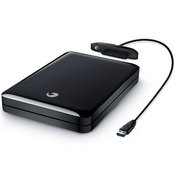 The company, which has been pushing the capacity envelope for HDDs based on current standards, released its latest FreeAgent GoFlex drive Tuesday. The portable device supports a Mac or Windows PC and can store up to 60 high-definition movies, 750 video games, or thousands of photos.

In addition, Seagate has included a USB 3.0 port and cable. When connected to another USB 3.0-supporting device, the drive can transfer data up to 10 times faster than devices using older USB 2.0 technology found on most devices.

For example, a 25GB file would take less than five minutes to transfer over a USB 3.0 connection versus 14 minutes over USB 2.0, Seagate said. USB 3.0 is backward compatible.

Besides offering lots of storage, the new drive can be used to play content on a high-definition TV using the Seagate add-on GoFlex TV HD media player. For accessing stored content remotely over the web, Seagate offers the GoFlex Net media-sharing device. Both add-ons are available at an additional cost.

The latest FreeAgent GoFlex drive can store and access files from both Windows and Mac OS X computers without reformatting. To make that possible, the user has to install a driver for the Mac provided by Seagate.

The new product is available online through Seagate or at select retailers for $250.

In striving to produce higher capacity drives, Seagate and competitors are trying to stay ahead of the growing need for storage as people use their computers for storing high-definition video, pictures, and music. Seagate, however, has been staying ahead of the pack in terms of capacity.

In June, the company introduced what it claimed was the industry's first 3TB external hard drive, the FreeAgent GoFlex Desk. While surpassing rivals in capacity, the company also kept the price competitive at $250, or about 8 cents per gigabyte.

However, the drive comes with a USB 2.0 base, requiring the user to pay an additional $40 for the optional base with a USB 3.0 connector.