Should Your Next Smartphone Be A Phablet? 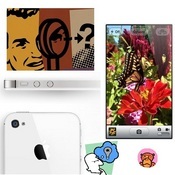 iPhone 5 Predictions: The Best And Worst
(click image for larger view and for slideshow)
Have you heard that term yet--phablet? Well, a phablet is what you get when you put cell phone functionality into a small tablet. And we're not talking just data here--rather, imagine a big smartphone that you can hold up to your head. Sounds crazy, right? And yet we are starting to see these in the market today, begging a typical question asked of the analyst community: Does the phablet make sense?

It just might--in some cases. A mobile device (more precisely, BTW, a subscriber unit) is the most visible element in the wireless and mobile information value chain, with said device today commonly a notebook PC, tablet, or handset. When we examine the differences between these three classes of device, we discover more in common than not. There's the usual processor/memory/storage components, an operating system of some form, and, most critically for our purposes here, a display and some input metaphor, normally either a physical or software keyboard along with some mechanism for pointing, selecting, gesturing, and etc. Apart from the differing GUI strategies and implementations, and who's got the most apps, of course, the biggest variables are the physical size and resolution of the display, and that keyboard/pointing mechanism.

With respect to the display, in general we'd like it to be as high in resolution as possible so as to both present more information simultaneously and provide better overall image quality. But the pixels can't get any smaller than are defined by the limits of screen manufacturing processes, and, equally importantly, the limits of the resolution of the human eye. Apple calls their screens "retina displays" for reasons of more than clever marketing alone. And the natural aging of the eye demands, as anyone over the age of 40 knows, either a larger display or decent eyeglasses--or, perhaps more often than not, both. So the larger screen of a phablet just might make sense with obvious appeal across multiple dimensions, so to speak.

And then there's the keyboard. The two-thumb typing technique can work well on both real and virtual keyboards--but it's hardly preferable. So a somewhat larger keyboard might make sense here as well--if you use an iPad, do you prefer that on-screen keyboard versus, say, the one on an iPhone.

And this leads us to the ultimate question--bigger screens and bigger keyboards mean the device itself must be physically larger as well. But how large can the device get? We see in some phablets today displays reaching more than five inches (e.g., the Samsung Galaxy Note) versus the four-inches-or-less typical in handsets, and thus stretching the limits of ... trouser pockets. And therein lies the key determining factor as to ultimate the success of the phablet. A device bigger than a pants pocket immediately puts the male market at risk. Women, of course, almost always carry handbags, and there's likely already a handset in each of those, with some room to spare. Moving up to the phablet form factor isn't too much of a leap in that case, but we doubt many men will wear a large device on their belts or start carry bags just to tote their phone--I mean, phablet. Convenience: compromised.

And then, of course, there's the issue of actually holding such a large device up to one's head. This isn't a big deal if one uses a Bluetooth (or other) headset, and I think such headsets may make a return regardless as the simultaneous voice and data possible on LTE enables greater device utility via positioning the device so its screen can be seen even while talking. So the nerd factor is likely to be quite limited in the case of the phablet--and that convenience factor thus determines market success.

The bottom line? While it's unlikely to challenge seriously any of the three primary form factors noted above, the phablet may very well find its niche in vertical and specialized markets--industrial, commercial, students--and with some casual end-users for whom e-readers with similar dimensions are already more than acceptable. For mainstream business and enterprise users, though, I wouldn't count on seeing very many phablets for some time to come.

Craig Mathias is a Principal with Farpoint Group, a wireless and mobile advisory firm based in Ashland, MA. Craig is an internationally recognized expert on wireless communications and mobile computing technologies. He is a well-known industry analyst and frequent speaker at industry conferences and trade shows.

Cloud Connect is expanding to the Windy City. Join 1,200+ IT professionals at Cloud Connect Chicago, where you will learn how to leverage new cloud technology solutions to increase productivity and improve your business agility. Join us in Chicago, Sept. 10-13. Register today!