SEARCH
A minimum of 3 characters are required to be typed in the search bar in order to perform a search.
Announcements
Alert
Got some free time? Grow your knowledge from the comfort of your computer for FREE!
Alert
Are you looking to stay on top of IT trends? Check out our FREE webinars and virtual events!
Alert
Planning for 2023? Be sure to check out our upcoming in-person events!
Report
How does your salary stack up? 2022 IT Salary Survey Results Revealed
PreviousNext
Mobile Devices
7 MIN READ
News

BYTE's Boonsri Dickinson spent some time using the Windows Phone 8X by HTC and found that it is relatively easy despite some problems along the way. Watch her video interview with the engineer in charge of Windows Phone 8 development to find out more about the phone's security features.
Boonsri Dickinson
Associate Editor of BYTE
October 30, 2012

After spending hours with the Windows Phone 8, I felt like I needed to go for a walk and chill out. Learning the phone takes some time, but after I set up my email, and my social streams on Facebook and Twitter, and got a chance to play with the camera, I had a pretty good user experience.

Of course, as a new user of the phone -- and a long-time Apple user -- I ran into some bumps along the way navigating the new Windows Phone 8 user interface.

In many ways, getting a new phone is like getting a new toy. Needless to say, getting my hands on the new Microsoft's Windows Phone 8X by HTC was no different. At first it was exciting, but then the novelty wore off.

On Monday, Microsoft launched Windows Phone 8 in San Francisco, with a slew of new social features, a kid-friendly section, and a redesigned UI. Personally, switching from an iPhone to a Windows Phone was easy -- same basic principle of having everything you want there at your fingertips. 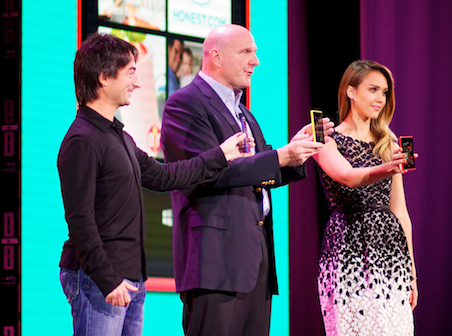 The Windows Phone 8X by HTC is an acquired taste, especially for an Apple user like me. The packaging itself is a bit cumbersome -- you have to install the SIM card with a little tool -- but there were many Microsoft people at the event to help me with the setup.

After getting the device out of the box and working within minutes, I liked the feel of the purplish case, and appreciated its slim design.

Microsoft announced several new features to show it's trying to differentiate itself from Apple and Google, including Live Apps, which take your social streams and turn your phone into a screen saver with Facebook photos; Kid's Corner, which lets parents control what kids can use on the phone; Rooms, which let you share grocery lists and other family- or friend-related stuff privately; and Data Sense, which shows you which apps are using the most data.

At one point during the presentation, actress, mother and co-founder of The Honest Company Jessica Alba put in a good word for the phone, pointing to the Kid's Corner feature.

The Live Apps feature became apparent as soon as I connected to Facebook and Twitter. Photos of my friends continue to pop up -- always changing like a screen saver within the little widget. Microsoft intentionally did this to make the look different from the static screen on Apple and Android devices. As soon as you sign into Facebook, your photos populate your photo album and your contacts.

At one point, I was checking my Twitter stream and accidentally tweeted out a person's handle after reading his tweet. Beginners (bad) luck I suppose.

I had some problems connecting the phone directly to my MacBook Pro. Only later, as I write this, did I find out that there is a Windows Phone Connector for Mac. It's actually named "Windows Phone 7 Connector" but I'm told it will also work with Macs, as Windows Phone 7 software does, as a rule.

After hooking up to Wi-Fi, I saved my videos and photos to SkyDrive, Microsoft's cloud storage service which also syncs content and settings across all devices, including Windows 8 PCs and tablets. It was a pretty quick process. The phone is designed to search for Wi-Fi spots nearby, so the consumer uses less data.

The HTC phone is just one option if you're interested in getting a Windows 8 Phone. There will be a Nokia phone coming in the next week that will have enhanced camera features and wireless charging.

Another feature that could come in handy is the map feature, which let's you see what places are near you for eating and drinking through the app called Local Scout, powered by Nokia's maps. It works pretty well -- it even suggests timely events -- proposing that I go on a Ghost Halloween adventure.

I love filming with my camera phone, so I spent a significant amount of time using that feature. I liked that filters were built into the photo and video settings and you have options over what resolution you want to snap photos and film videos in. The filters aren't as good as what you'd find on Instagram, but for a quick snapshot, a few of the filters will do. Here's an example of a photo I took while waiting for the bus: 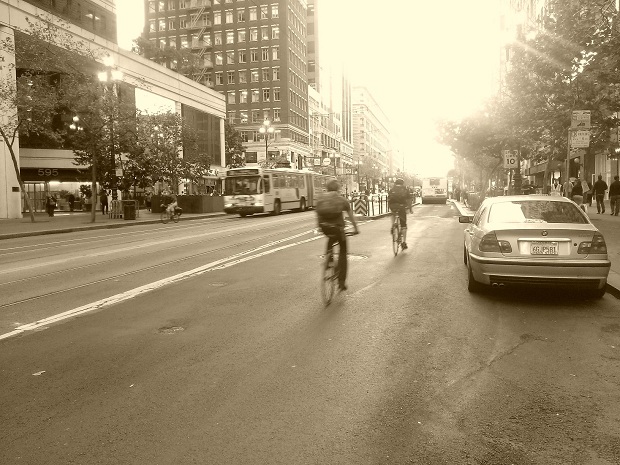 Waiting for the bus in San Francisco, I used the sepia effect on Windows Phone 8x by HTC to capture an unusually empty Market street during rush-hour traffic.

A lot of emphasis at the event made it seem like the Windows Phone would make a good consumer and family-friendly phone. However, a lot of its strengths are in its work-related features such as the deep Skype integration which makes it easy to make phone calls with the phone. This makes me think that Microsoft is desperately trying to appeal to consumers so they will bring their devices into the office -- in the same way iPhones and Androids have infiltrated the workplace.

This is a smart move for Microsoft, as it has to appeal to this crowd for major adoption, and the fact that everything hooks up via the Skydrive cloud storage, and the phone works with tablets and PCs, makes quite a compelling case for mobile workers. As for a strong consumer play, Microsoft will seriously have to get developers making apps for its app store -- or else having just over a hundred thousand apps pales in comparison to the millions of apps that are developed for Apple and Android.

Since I write a lot, I decided to email myself a draft of this story and upload the text to Microsoft Word on the HTC phone. I found it relatively easy to make edits, although getting used to a new keyboard can always be kind of clunky. I saved the changes to SkyDrive and emailed a copy of the document to myself and completed the story on my computer. I really liked being able to create content on my phone and being able to finish it on another device.

While at the event, I spoke with Microsoft's Henry Sanders, long-time engineer who ran the development team for Windows Phone 8, and asked him for his thoughts on if the Windows Phone 8 is fit for people bringing in their own devices. Check out what he has to say:

Sanders pointed out that the phone does have encryption for email via the BitLocker Drive Encryption. "I think our security is great, it uses the same basic technology that exists on existing Windows PCs," he said. He really liked the Rooms feature -- but wouldn't show me what he used the rooms for, claiming there was confidential information on it.

Some other enterprise settings include a section for company apps. With a company account, IT folks could disable the employee's SD card, encrypt internal storage, and remotely delete all content and settings. If it's a BYOD device, it's unclear how this will affect the personal information on the employee's phone. There's also a feature that lets you find your phone if it is lost.

I used the phone for what I would use it for normally -- to take photos and videos and to write up a story and read the news. All seemed fine except for the extremely clunky experience of having to transfer files off of my phone, which I am still trying to figure out how to do. Whatever you do don't forget your SkyDrive password like I did -- for some reason, the email address associated with my account is not mine and there's no way to change that.

Overall, I liked using the Windows Phone 8, expect for the really annoying SkyDrive problem I ran into -- which I know is my fault for forgetting my password in the first place.