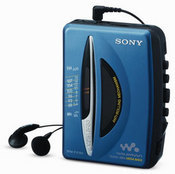 Sony Walkman
Sony's iconic cassette-playing Walkman that introduced the concept of portable music for millions of people will soon disappear from store shelves in Japan.

The consumer electronics company announced Friday that it will no longer sell the tape-based player in Japan, where it will be available only as long as supplies last. Sony, which has already stopped selling the device in the U.S., had halted shipments to Japanese retailers in the spring.

However, the venerable Walkman, first introduced in 1979, won't disappear completely from the world's stage of portable music players. Sony has sold the rights to the name to a Chinese manufacturer that will continue selling the device in overseas markets, including the U.S., according to the Associated Press.

More than 20 years before Apple introduced the iPod, Sony's Walkman was on its way to becoming a global hit. The company has sold 220 million Walkman cassette players worldwide over three decades, with the majority -- 186 million -- sold by 1999.

For years, Sony owned the market for portable music players. It followed up the Walkman with the Discman CD player, which also proved extremely popular. However, Sony hitched its players to technologies, such as DAT and MiniDiscs, that failed to catch on, which opened the door to Apple. After the introduction of the iPod in 2001, Sony eventually became just another one of the many vendors chasing the MP3 player, which today accounts for 77% of the U.S. market, according to The NPD Group.

The Walkman's demise in Japan brought lots of commentary from bloggers, some remembering the first time they bought the handheld player. Coincidentally, Sony killed the Walkman in Japan almost the same day Apple introduced the iPod, which was Oct. 23, 2001. However, most industry observers say the end of the original Walkman actually started with the introduction of the CD.

The Walkman name will live on as the brand for Sony's MP3 players, which like many other non-iPods has a market share in the U.S. in the low single digits. In addition, the cassette-playing Walkman could someday make a comeback, if tapes see a resurgence similar to vinyl records. But for now, the original Walkman will become one of many devices that once had their moment of fame in technology history.