BYTE columnist Bob Guccione Jr. discusses the implications of driving smart cars. No one wants to say this, but a technology that has to alert you that the car in front of you is moving is made for people who are texting. Or making a sandwich.
Bob Guccione Jr.
Contributor
August 10, 2012

Recently I was at lunch in Boston in a restaurant where the floor-to-ceiling windows were opened onto the parking strip in front. A car was backing out of its spot and a mechanical voice, like the sort of emergency voice you hear in a hospital when it's on fire, boomed across most of Southern Massachusetts, "BE CAREFUL! YOU ARE BACKING UP! BE CAREFUL! YOU ARE BACKING UP!"

This was true and it was going to be a while yet before it was no longer true. Indeed the car was inching its way out of a spot, with enough room on either side to have built a small home, and nothing behind it for 20 yards. Eventually the car extricated itself, still reversing at the dizzying speed of three miles per week, and began to straighten out. But the otherworldly herald had not relaxed its vigilance and for as long as that car was going backward, be it until the end of time, and that looked possible, it was going to solemnly intone, "BE CAREFUL! YOU ARE BACKING UP!"

And I wondered, in that moment, what kind of mental marshmallow needs to be told a) that they are backing up, or that b) they should be careful? At what point, in the nano instant between deciding to leave the parking space, turning on the engine, engaging the reverse gear and actually reversing, does a person forget what they set out to do?

What happened to us? When did we become this pathetic? 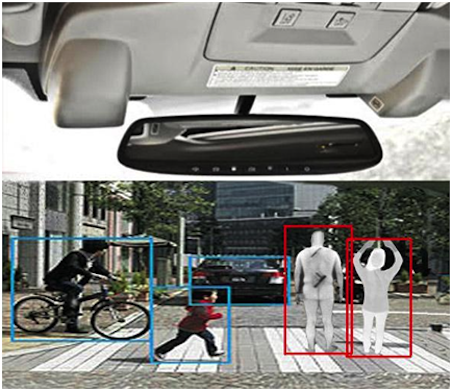 Next year it will be standard on most new cars to have a rear view video display so that you can look forward while reversing--which I think by definition is wrong-minded. What, I ask, obvious ingrate for the ceaseless marvels of automobile technology that I am, is wrong with turning around and looking out the back window?

The idea is that a rear-view video camera will prevent harried soccer moms or uber executives from backing over their offspring, or neighbors. This is supposed to make cars safer, and perhaps if they drove themselves rather than being piloted by increasingly lazier human beings, it might. In reality it will achieve the opposite effect. I predict it will lead to not infrequent slaughter, as suburbanites crush pre-schoolers and pets they should easily have seen, by first taking inventory and secondly looking out for them.

I drove a car with the rear-view video screen once. It's unnecessarily disorienting. The resolution is that of a closed circuit television camera at an ATM. I suppose, with experience, you learn to make out objects, and the street, and possibly human beings and animals, in the rust-colored monotone of the discombobulating, tunnel-visioned picture rolling toward you, so I can't be too critical. And probably I'm just old fashioned to think that the best way to see where you are going is to look in that direction, and that if you can't for any reason, you shouldn't be driving.

But that's nothing compared to what's coming! Subaru is putting its mind-boggling EyeSight system into its mid-range vehicles in 2013. I'm afraid I don't mean mind boggling as a compliment.

Irritatingly, the lane departure thing sounds an alarm every time the car crosses a lane without signaling. Now, you are supposed to signal when you change lanes, and I of course always do, but not doing so does not quite rise to an act of terrorism, and is not really a threat to humanity in the sense that, say, nuclear war is. I believe lane crossing is something we have evolved to being able to cope with. There are cases where people fall asleep at the wheel, but they shouldn't have gotten into a car to begin with, and unless the dashboard can scream, "WAKE THE @%?! UP! YOU'RE DRIVING INTO TRAFFIC!," I don't think a little chirp-chirp will help.

Pre-Collision Control and Adaptive Cruise Control are intended to stop you from driving into the back of a car that has slowed or stopped in front of you. Admirable idea! But not novel. For instance, it has no doubt occurred to every driver who has ever gotten behind a steering wheel. I am going to go out on a limb here and say that it is so fundamental a concept not to drive into a vehicle in front of you, that it is probably not even taught in driving school.


BYTE recently tested the iOnRoad app which performs many of these functions. Click here for that story, with video.

The system, according to the press release, "maintains a safe distance from the vehicle in front, braking and accelerating the car as needed and can fully stop the vehicle if it 'locks on' to another vehicle in front." Which, in testing by Consumer Reports, and other reviewers, it apparently does with great and regular enthusiasm. That's right, it stops the car when it feels it should, even when the car did not need to stop. Oddly, no one has addressed the likely multi-car pile up, and the inevitable carnage, that will happen behind the suddenly arrested Subaru.

Putting aside the many perils of a car overruling its driver, what happened to the notion of a driver paying attention? Why, as a society, do we prize finding ever more layers to insulate ourselves from responsibilities? This unnecessary, busybody technology is going to kill more people than it could ever hope to save, by allowing them to think they are now somehow immune from the unpredictability of the road.

Eyesight also offers something called Lead Vehicle Start Alert, whereby when a stopped car in front of your car moves again, you are notified. My question is, why would you need to be notified? One might reasonably expect drivers to be aware of cars in front of them. Traditionally, that's been a given.

No one wants to say this, but a technology that has to alert you that the car in front of you is moving, is there, unintentionally or not, to accommodate people who are texting. Or making a sandwich.

One reviewer, in what I suppose was a positive review of EyeSight, wrote, without any hint of irony: "As a bonus, the system is also capable of pedestrian detection."

I think that says it all.