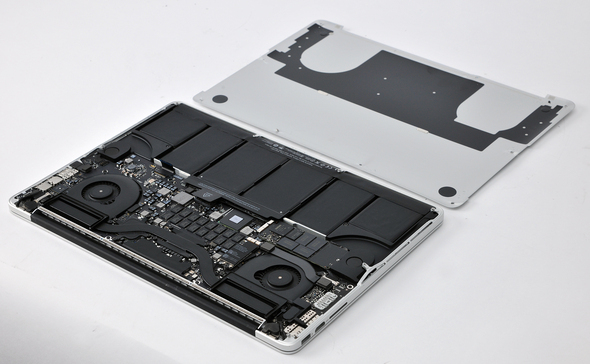 In this picture the back panel is opened. As with all MacBooks, it's pretty busy in there. We'll zoom in on the images to come. But it's immediately clear that the MacBook Pro, as we reported recently, is almost impossible to repair and probably quite difficult to recycle. Many components, such as RAM, are soldered to the motherboard. Some parts, such as the display and battery, are glued in, making access to other components difficult or impossible.

The MacBook Pro with special Retina screen is the first major MacBook Pro redesign in several years. It's even thinner, at .71 inches, and equipped with a screen that has an 2880 x 1880 resolution, giving it a pixel density of 220ppi. Both of the available models have a 720p FaceTime HD camera, USB 3, and a newer, thinner MagSafe 2 connector.

The $2,799 model features a quad-core Intel Core i7 processor, and 512GB of flash storage. This is the model used in our teardown.