The End Of BYOD As We Know It?

Will IT need to limit which devices can connect to the corporate network? It feels like we're heading for separate Internets, aligned with mobile OSes and their respective clouds.
David Berlind
Chief Content Officer, UBM TechWeb
March 20, 2013
To the extent that such boundaries amount to BYOD-stifling standards, the big question is who will be the winners and losers? We know how iPhones and iPads found their way onto corporate networks. Will end users force IT departments to also accept the latest, greatest device? Will programs like Samsung's SAFE result in a reserved parking spot for API-compliant devices? Will BlackBerry or Windows Phone be automatics because of certain "alignments" (pre-existing BlackBerry Enterprise Servers or shoe-in compatibilities with Exchange Server)?

The answers to these and other questions will control a significant amount of spending on devices over the next three to five years (perhaps longer, but 10 years just seems too risky for any predictions). It does give you some idea of why Samsung is moving quickly and placing big bets.

If these questions needed answering today, the devices themselves (and their capabilities) would weigh most heavily in the decision. However, in the future, the clouds to which business and consumer devices natively connect will eventually carry the most weight. The video on the previous page suggests that having the best low-light photo taking capability is enough to sway a discriminating smartphone buyer (who, incidentally, could be any BYODer). Today, there's some truth to this decision-making scenario. The device is the sexiest part of the pitch. However, it's the cloud behind the device that will increasingly, over time, come to define the device, its differentiators and the priorities for BYODers. For businesses leaning in the direction of the aforementioned boundaries, the business functionality hiding in that cloud could easily determine the outcome.

As InformationWeek editorial director Fritz Nelson and I explained it during our keynote presentation at a recent E2 conference in Silicon Valley (see photo below), the devices and their respective clouds are aligning. Take your pick; Android/Google, iOS/iCloud, Windows Phone/Microsoft's Cloud, etc. Ask not what the device can do, but rather what its cloud can do. 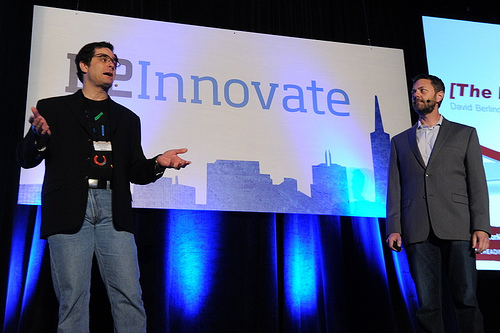 David Berlind (left) and Fritz Nelson share their mobile walled-garden hypothesis at the most recent E2 conference in Silicon Valley.

The mobile OSes and their associated clouds are becoming increasingly aligned with one another to the point that it is becoming very inconvenient to mix and match them -- if it can be done at all. Who really wants to be a systems integrator? You can be assured, for example, that Google's Gmail will excel on Android devices before other platforms and the same goes for many of Google's other cloud-based services. As far as Apple is concerned, Google Maps and YouTube apps are Trojan horses feeding valuable customer data -- data that Apple would rather have for itself -- to a competitor. Apple's axing of Google Maps and YouTube are great examples of how the walls (as in walled gardens) are coming up. Upon activation of their devices, power users may go to the trouble of swapping apps where possible. But most won't.

Given how mobile is well on its way to being the dominant method of Internet and Web access (it is already for Facebook, which recently crossed the 50% threshold), it sure feels like we're finally heading for separate Internets. Each will be walled-in by the somewhat proprietary alignment that exists between the mobile OSes and their respective clouds. Enclosed in those walls, businesses will likely find services worth subscribing to (e.g., Google Apps For Business). But those services will be so strikingly different from one cloud to the next (not to mention how they're integrated with other services in the same cloud) that those same businesses may have no choice but to dissuade BYODers from bringing "non-aligned" devices to the network.

What do you think? Is it the end of BYOD as we know it? If not, why not? Let me know in the comments below.