The Google/Motorola Deal is Done. What Now?

Google's purchase of Motorola Mobility is complete, but there are still many unanswered questions. Will Moto's Droid phones have some home field advantage for Android? Or does the real special secret behind this deal revolve around Motorola's popular line of TV set top boxes?
Jerry Ryan
Contributor
May 23, 2012

Now that Google has leapt over the last hurdle on closing the deal to buy Motorola Mobility (here's the press release), it seems timely to take a look at why this deal is happening in the first place and what might come next.

Before I take that look, it is appropriate to note that I have, or at least used to have, some skin in this game. Until late last year I was a senior software manager inside of the Mobile Devices business at what we now know as Motorola Mobility. Among other things I led the product team for the Droid2 Global and the Droid RAZR products, before being downsized out of MMI at the end of last year. While I don't think my opinions are tainted by my history, you the reader should know that history and decide for yourself. I'll also disclose that I own no MMI stock or options to buy it, in case that makes a difference.

So, why DID Google buy Motorola Mobility? What's going to happen next? And, is there an interesting story here that nobody is talking about? (spoiler alert: yes, I think so).

Back in April, the Wall Street Journal speculated about what Google had in mind when they decided to make this purchase. The conventional wisdom at the announcement of the deal was that the purchase of the Motorola patent portfolio would help protect Google's Android from legal assault. Very little was said, then or now, about what would happen to the people at MMI, or how much influence Google would have over decisions about hardware features going forward. If any decisions have been made on that front, nobody has been saying that I have heard.

In the four years that I was at Motorola, the company transformed itself into an Android smartphone shop, largely abandoning the small, low-margin flip-phones and candy bars running BREW for a line of high margin, sophisticated smartphones running Android. As I told my coworkers as it was happening, Sanjay Jha deserved a lot of credit for forcing those changes. I'm not sure that Motorola wouldn't have folded up shop, or at least folded up the mobile devices business, had it not made the transition. Incidentally, the same press release announcing the closing of the transaction announces Dennis Woodside, formerly President of Google's Americas region, as the new CEO of Motorola Mobility.

Jha's changes came at a price, of course. There were some painful cuts. Motorola is now making fewer phones than it made in the past. Fewer people are needed to make the smaller number of those high-margin phones, and fewer people are needed to integrate Android as opposed to integrating and doing component development on other OSes. Motorola's a smaller place than it was before the transition started, and nobody is yet sure if there may be further changes, both in staff and in focus.

Will Motorola Mobility abandon the hardware business completely, as some have speculated? It seems unlikely to me that this will happen, at least in the near term. With the acquisition, Google's purchased a revenue stream that they'd be loathe to surrender, and a piece of the smartphone revenue pie that is small, but that has room to grow. Can Google restructure MMI, eliminate duplicative development, make their new division more profitable, and grow that slice of the pie? I'm sure they think so, and I do too. It's not likely that Google spent all this money just for a patent portfolio -- they expect to step up to the challenge of trying to nurture and to grow this business.

I think the real challenge is for Google to figure out how to make sure that other Android users won't feel like Motorola Mobility is getting some sort of Android advantage. There's going to have to be some sort of visible firewall between the Android division and the Motorola mobile devices world to make sure that other partners aren't spooked into trying other smartphone OSes, or de-emphasizing their Android commitments. Look for Google to make some public announcements of partnerships or deals that will show their commitment to keeping some neutrality in the supply of Android.

Actually, I maintain that there is a big interesting thing here that nobody has talked about very much: Motorola Mobility's set top boxes.

Before the announcement of the Google deal, Motorola had already been working to split itself into pieces. Motorola Mobility was to be the smartphone company, and Motorola Solutions was to be everything else. Just prior to the announcement of the Google deal, the "Home" business -- what Motorola called its set top box division -- got moved from the Solutions side to the Mobility side. Other than sparking a few jokes about working for "Mobile Home," this change didn't mean very much to those of us in Mobility at the time.

When the Google deal to acquire Mobility was announced, I began to wonder if the Home business wasn't the real unappreciated bit of value in the deal, and if the move had actually been done to sweeten the deal.

Think about it this way: Google's on your computer already. The name of the company is a synonym for searching for something on the Internet! Their Chrome browser is popular, and that popularity is growing. They're on your smartphone if you have any of the Android devices in the market today.

And now that they have purchased the company that makes set top boxes for a lot of cable carriers. Google now has a path to get into your family room and onto your TV.

Call me crazy if you like. After all, nobody else seems to be thinking or talking about this being a biggie. But I would not be surprised if my Motorola Mobility set top box got a Google flavor before too long. 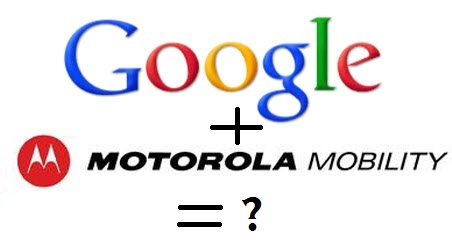