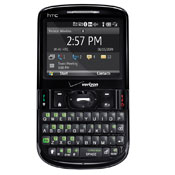 With the HTC Ozone smartphone, Verizon Wireless is looking to attract first-time smartphone buyers who want to stay connected on the go.

The handset will cost $49.99 after rebates and a new two-year contract, but the smartphone is packed full of high-end features. The Ozone has a similar form factor to a BlackBerry device; it sports a full QWERTY keyboard on its face for composing messages.

The Ozone is powered by Microsoft's Windows Mobile 6.1 Standard, which means users should be able to get their corporate e-mails and calendars on-the-go. Over-the-air e-mail from Web-based messaging providers such as Yahoo Mail, Hotmail, and others is also an option.

The handset will be able to access Microsoft's upcoming Windows Marketplace for Mobile, where users may browse, buy, download, and install applications directly onto handsets. The marketplace is a direct response to Apple's App Store for the iPhone and iPod Touch. There are currently more than 20,000 apps for Windows Mobile.

The Ozone can use Verizon's EV-DO Rev. A 3G network to browse the Web and download files and has integrated Wi-Fi, a relatively rare feature for Verizon smartphones. High-end devices such as the BlackBerry Storm lack Wi-Fi.

Multimedia playback shouldn't be a problem as the mobile version of Windows Media Player can handle various types of audio and movie files. The Ozone also has a 2-megapixel camera, a microSD slot for expanding the memory, stereo Bluetooth, and visual voicemail. The Ozone can be pre-ordered June 29, and it is expected to be in stores July 13.