In the coming months Verizon Wireless and others are expected to also release smartphones based on the latest Linux-based mobile platform.
W. David Gardner
Contributor
September 25, 2009 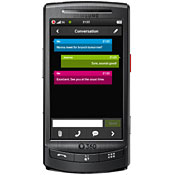 The first handsets supporting the LiMo Foundation's Release 2 were introduced Thursday. The Samsung touchscreen devices will support Vodafone's 360 service, Vodafone said. The LiMo Foundation is the industry group behind the Linux-based operating system for mobile devices.

At the same time the LiMo Foundation said operators planning to bring R2 handsets to market in the coming months include Verizon Wireless, NTT DOCOMO, Orange, SK Telecom, and Telefonica.

The collaboration between Vodafone and Samsung that resulted in the Samsung handsets "signals the first of a wave of R2 LiMo handsets due in the coming months," said Morgan Gillis, executive director of the LiMo Foundation, in a statement. Samsung's Vodafone 360 H1 represents Samsung' first LiMo-based product. The phone features a 3.5-inch WVGA AMLED display and 720P HD video recording.

Last spring, the LiMo Foundation released the specs for R2 and they include the capability to integrate with the Bondi framework and its platform for mobile widgets and Web apps. Also included are location-based features, VPN security solutions, and PIM software.

The new Samsung devices follow the unveiling last month of LiMo handsets developed in an earlier LiMo release. Those devices are made by Panasonic and NEC, which are making the handsets for NTT DOCOMO.


Get all the data from this year's InformationWeek 500 survey free for a limited time. Our report examines business and technology best practices as well as IT investment trends among the nation's most innovative IT users. It also provides industry comparisons against which you can benchmark your company's strategies. Download the report here (registration required).