Why Is The iPhone Made In China?

Apple gets filthy rich selling devices made by oppressed workers in abusive environments. Does it have to be this way? Well, yeah, maybe it does.
Jacob Lopez
Contributor
April 25, 2012

As most of us very well know, our iPhones and iPads, as well as most of our consumer electronics, are made in China. This is where factories such as Foxconn's iPad and iPhone manufacturing facilities are located. iFixit recently took a look into why the devices are built in China. There isn't any one reason, rather a combination of factors that come into play as to why your favorite 10-inch tablet is built there.

A recent academic "working paper" from the Centre for Research on Socio-Cultural Change (CRESC) at the University of Manchester in the UK entitled Apple Business Model: Financialization across the Pacific takes the position that Apple could still profitably manufacture the iPhone in the U.S. Two graphs from the paper show how they get to this position after a lot of social science gobbledygook: 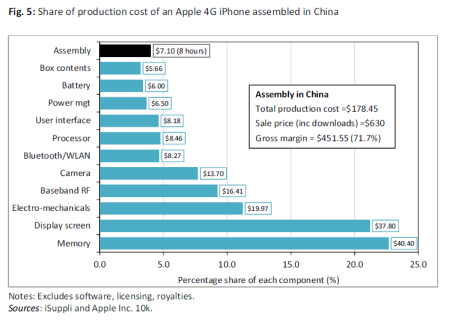 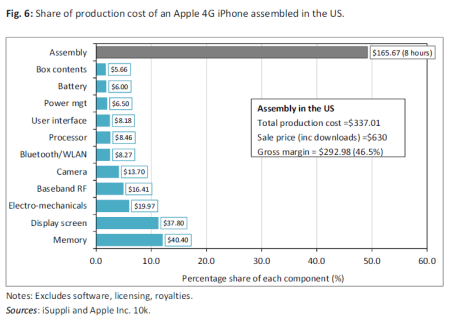 Note that the reference to the "iPhone 4G" appears to be erroneous. Based on their sources they must be referring to what we call the iPhone 4.

The thrust of these graphs, assuming the accuracy of the numbers in them, is that Apple could manufacture the iPhone in the U.S. for about a 35% drop in margins. Setting aside the question of whether this is in shareholders' interests, the model assumes each unit costs eight hours of labor at $21 an hour. The report says $21 an hour is the average in the electronics industry and does not explain the eight-hour number.

iFixit also points to the environmental regulations, which are much looser in China than in the U.S. China was rated 116 out of 132 countries on Yale's 2012 Environmental Performance Index.

Then, of course, there is plenty of manpower in China. Foxconn is said to have about 1.2 million employees, and 400,000 of those work in the factory that drew media attention for suicides. That's a lot of people for one factory. Luckily, China has about 1.3 billion people, and lots of them are looking for work. Guess where they go? Foxconn.

But the academic model also assumes that the materials would cost the same in the U.S. as in China, and this turns out not to be true. One of the biggest and less obvious reasons that your iPad was built in China is natural resources. The iPad and other electronics, including much "green technology," make extensive use of rare earths, a group of 17 elements that aren't really all that rare, but can be difficult and expensive to mine.

The measures necessary to make the elements economically extractable create environmental problems that run into fewer legal obstacles in China than in many other countries. As told in the iFixit article, China is a substantial source for these materials and has strict export quotas on them. As much as 97% of the world's supply of such materials is controlled by China, says the report, but electronic companies can bypass such quotas, in turn keeping prices down, by keeping the manufacturing--you guessed it--in China.

The bottom line is that manufacturing the iPhone in the U.S. or any other western country with modern environmental legislation and labor rules would cut the profitability of the device precipitously. And slashed profits is not why companies like Apple make products like the iPhone.