12 Open Educational Resources Shaking Up Higher Education
(click image for slideshow)
The open education revolution is making for strange bedfellows. Wiley announced Monday that it will redistribute material from OpenStax College, which makes introductory college textbooks available as free downloads, along with its WileyPlus interactive practice and assessment tools.

As a leading textbook publisher, Wiley might be expected to see OpenStax College as a threat, given that the nonprofit venture from Rice University aims to eliminate the need for students to buy expensive textbooks, starting with introductory texts for physics, sociology and biology. Instead, Wiley is acknowledging that OpenStax College is producing high-quality products but betting that it can make a profit by supplementing them with its own interactive learning tools.

"As I understand it, their mission is to improve the accessibility of affordable educational materials, and we actually share that goal," said Kaye Pace, VP and executive publisher for global education at Wiley. "We would like to offer students more attractive pricing."

The partnership is an experiment for Wiley, and so far it doesn't extend to any other subject beyond introductory biology. Pace said Wiley probably would be less tempted to partner with OpenStax on a subject such as physics, where it already has one of the leading textbooks in production. But anything is possible, she said. "This really is a pilot for us, a chance to work in this way and see how it goes."

"I am hopeful because I think Wiley doesn't make these kinds of commitments unless they're in it for real, and neither do we," said David Harris, editor-in-chief for OpenStax College and Connexions, a related program that creates openly licensed instructional materials in a modular format. "We have every intention of expanding this if we can."

Wiley is comfortable that OpenStax meets high standards because it follows a process similar to that of a traditional textbook publisher, using foundation grants to pay the author and hire peer reviewers, Pace said. "They are producing something of quality that has been vetted." At the same time, "they don't really provide the complete solution; they provide the textbook piece," she said. Universities are increasingly adopting educational products that go beyond the textbook and include digital elements.

Wiley increasingly believes it can add more value with the interactive component, and partnering with OpenStax "means we can put our whole investment in that piece," Pace said.

OpenStax is creating two introductory biology texts, one for majors and one for non-majors, with chapters available online now and the final editions to be published this fall. That is also when Wiley will start a pilot program for its WileyPlus college biology product. Pace said she expects to recruit about a dozen universities, each of which will commit to testing the materials in at least one section of its college biology program. 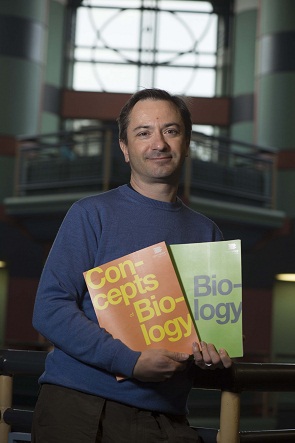 OpenStax College is part of the Open Educational Resources (OER) movement, which encourages the release of textbooks and other educational resources under some variant of the Creative Commons licenses. OpenStax makes its textbooks free to download, redistribute and remix, with proper attribution. Rice has been a pioneer in this movement since 1999, when it created Connexions under the direction of Richard G. Baraniuk, a professor of electrical and computer engineering. The same digital learning program recently unveiled a beta of OpenStax Tutor, which applies machine learning techniques and cognitive science theory to the design of its interactive study and assessment tool.

While Wiley is exploring avenues for partnering with the OER movement, some textbook publishers are accusing the movement of producing low-quality work. A few currently are suing Boundless, a company that redistributes OER materials including some from OpenStax in "alignments" it claims are functionally equivalent to popular commercial college textbooks.

Although OpenStax books are free to download and can be purchased inexpensively in print editions, the relationship with Wiley is not unique. Other interactive publishers have forged deals to distribute OpenStax content in combination with their own products and services. For example, Sapling Learning promotes a bundle that includes the OpenStax physics text in combination with its interactive learning tools. In the process, these businesses provide a sales force to help the OER textbooks compete with those from commercial publishers. This is not unlike the way businesses from Red Hat to IBM assist with the distribution of Linux and other open source software products.

With OpenStax Tutor, the Rice program is venturing into a world of interactive courseware that could eventually put it in competition with some of its commercial partners. However, the software is still at an early stage of development and even when complete it will be a tool for creating interactive lessons, which is separate from producing all the content to accompany the tool, Harris said. "What we've developed with both OpenStax College and OpenStax Tutor is all under open licenses, so we think there will be an opportunity for the community to take and adapt these resources," he said.