Will iPads Get Intel CPUs or Macs Get ARM?

Rumors have been spreading that Apple will shift their Macs to ARM processors and that Intel will make them. It's more likely that Apple and Intel will compromise and move higher-end systems, including the iPad, to Intel architectures. Moving the iPhone won't make as much sense.
George Ou
Contributor
December 02, 2012

Rumors have been swirling of Apple switching away from Intel and completely to ARM. Here are some scenarios and the likelihood of them happening.

Apple completely switches away from Intel

When rumors spread last month about Apple moving MacBooks to ARM, proponents of this theory pointed out that Apple's custom chip is already faster than Intel's Atom chips. But that's only for smartphone and tablet processors and Intel is still 3-8 times faster on notebook processors.

Here's a compilation of benchmarks comparing an Intel x86 "Sandy Bridge" processor, Intel "Medfield" and "Clover Trail" processors, and ARM processors from Apple and Samsung. The benchmarks use SunSpider, a JavaScript-based benchmark from the Webkit project. The scores are times to complete tasks, so smaller is better.

Could Apple boost their own ARM chip 3-fold and possibly use it in a product like the Macbook Air? There are two problems with this scenario. First, while Apple boosts ARM performance 3-fold, Intel won't be standing still with its upcoming Haswell and Broadwell processors, which means a gap will still exist. Second, it will take a huge performance hit doing binary translations of x86 Mac applications to ARM. As much as Apple wants to switch to in-house CPU technology, Apple is a pragmatic company so the likelihood of Apple moving completely away from Intel is very low.


BYTE's Larry Seltzer imagines the iPad and MacBook combined into one.

Apple could also ask Intel to just make Apple ARM chips for its own smartphones and tablets. Apple would get access to the most advanced fabrication process in the world but Intel would be disinclined to do this. This would make Apple's ARM chips faster and make them more competitive against Intel's processors. Intel would get revenue from fabrication services, but it is not a high margin business. Intel makes far more money making chips based on their own intellectual property. The odds of this scenario happening are also very low.

Could Apple switch to Intel processors for its iPhone and iPad? Probably not for iPhone because Intel's current "Medfield" Atom chip is slower than Apple's custom ARM chip. Intel's Merrifield chip due in 2013 will likely get a 2x boost in performance over Clover Trail, but Apple won't stand still in performance so a gap will probably still exist.

For the iPad there is a realistic possibility. Intel Haswell and Broadwell will bring notebook and desktop computing performance into the mobile arena for tablets by drastically lowering the power consumption. Intel's Haswell will likely have a huge performance advantage over Apple's ARM chips. It might run ARM emulation faster than ARM instructions running natively on Apple's ARM processor. This opens the possibility for a compromise between Intel and Apple.

Intel could agree to make Apple's ARM processors for the Apple iPhone in exchange for Apple switching to Intel for the iPad. Since Apple is already looking to move away from Samsung's fab, this compromise between Apple and Intel may already be happening. This means Apple would get the much faster CPU and GPU for its iPad and a much better fabrication process for its own ARM processors. 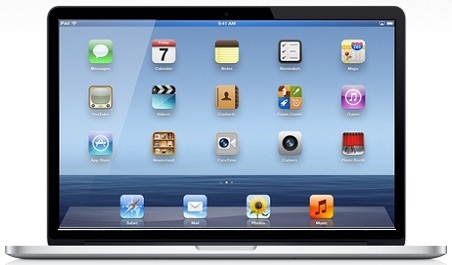 Yet another architecture shift?!?!

Apple has already hauled Mac developers from the 68K to the PowerPC to Intel architecture. Those earlier switches were necessary because the processor lines had topped out on performance. Apple was able to get away with these moves by providing some tools and, for a while, emulation of the old chips.

There wouldn't be a performance argument for moving Macs to ARM, not even in the long term. The main argument for picking one chip would be if Apple wanted to unify the iOS and MacOS product lines into a single software platform, as BYTE's Editorial Director Larry Seltzer has suggested. After such a move, Macbooks would stay on x86 but iPads would switch to x86 with emulation support for existing ARM software. The development process for tablets is much simpler to port compared to Mac applications.

At least for the iPad, if not the iPhone, this makes sense. Microsoft may or may not have gotten the tablet-PC combination right in Windows 8, but they have the right idea, and Apple is keeping a close watch. Currently their software is far away from this, so don't expect it any time soon, but depending on how consumers react to Windows 8 it may make sense.

Apple vs. Intel: Why pick a fight?

As smart as Apple’s CPU architecture team is, do they really want to go against Intel in the long run? Sure they caught Intel with their pants down in mobile because it takes Intel 5 years to create a chip from scratch, but Intel is getting caught up. Many companies and pundits have written Intel off in the past. First it was RISC and then it was AMD. Intel might stumble from time to time but fabs and chips are their bread and butter.

Some would say that a company as successful as Apple would be crazy to change a winning formula, but this is the technology business. Things change rapidly and if you don't take charge of your own destiny someone else will do it for you. Even with the market the way it is, Apple is vulnerable.