The fact that Windows Phone 8 is Windows, and not a radical variant, means it can be managed like Windows. While other phones must be managed through new and separate management tools such as MobileIron, Windows Phone 8 plugs right into Active Directory. IT can use standard tools and consoles and deploy apps in the usual way.
Larry Seltzer
Contributor
June 28, 2012

I recently wrote about how how Windows Phone 8 is an actual Windows environment and the important implications of this.

I left out one big implication, perhaps the most important one, especially if you're in IT: Because Windows Phones run Windows and join Windows networks, they can be managed like Windows systems.

Microsoft discussed this some, but not extensively, at the Windows Phone Summit last week in San Francisco. Below is a video of the entire two-hour event. The relevant parts start at 0:27:27.

Out of the gate, most mobile platforms were completely unmanaged. BlackBerry was the clear exception to the rule, and its excellent security and manageability is what keeps it alive. (Heaven knows it's not the software.) But after Apple revealed APIs for manageability, an industry developed around management of mobile devices known as Mobile Device Management (MDM).

The best-known and most popular of the MDM products is MobileIron, but there are perhaps 100 companies in this business now, and MDM is commoditized. The real action has moved a step up into what is known as Mobile Application Management (MAM), a much more sophisticated approach that allows IT to use policy to control the security and capabilities of individual applications, among other things. It's a dynamic and exciting market with several important players from Apperian to Citrix to BoxTone.

Of course, there's a downside. Management of mobile devices has to be done outside the existing management infrastructure, potentially a very large system with a lot of investment behind it. To manage mobile devices administrators have to go to a separate console and potentially manage a separate policy repository.

But for Windows Phones things are different. Are you a Windows network admin? If so, you probably know what's in the picture below: 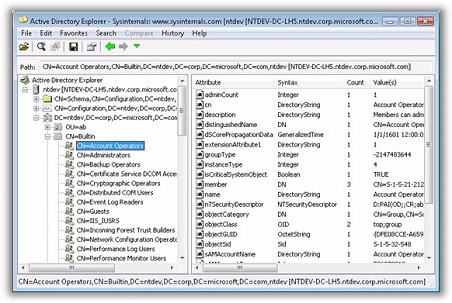 That's Active Directory Explorer, one of the core management tools for Windows networks, but there are numerous third-party tools that use the same APIs and protocols to do the same management. Windows Phones will be manageable through these standard tools. There will need to be extensions built into the management system for Windows Phones, but they are extensible. In this way, administrators can stay in their existing management environment and maintain better control of policy.

All the main security features IT would want are in there: Bitlocker and secure boot so--if your credentials are strong enough--you don't have to lose sleep over lost devices. All software updates are over the air, and Microsoft pledges to provide updates for all devices for at least 18 months. "Registered enthusiasts" can get early access to updates.

Later in the Windows Phone Summit (1:34:57 in the video above) Microsoft demonstrated the "company hub." This is a group of IT-controlled components on users' phones that display whatever IT wants to put there. There can be the equivalent of an internal app store, company news, and many other things. In some ways it resembles the home page for a SharePoint user, but it's much more. It comes with a collection of templates for companies to use or modify.

One more thing--even though it's not specifically an IT issue--WP8 will roll out with language support all over the world, 25 more countries than iOS. This isn't surprising because Windows has always had the best international support, and Windows Phone 8 is Windows.

It's true that many people are itching for something new and better than Windows, and the mobile markets provided a first glimpse of a real opportunity. But this could change as users and companies come to realize that the same reasons that argue for Windows on the desktop, where it's still overwhelmingly dominant, argue for Windows Phone 8.