Apple's expected release of a humongous-screened iPod will legitimize the platform for business users. It could, in turn, revive Windows-based tablets and make Webpads the big alt.platform story of 2010.
Alexander Wolfe
Contributor
December 26, 2009
Thus I believe the release of Apple's iSlate/iPad/GinormousPod will reenergize the market for business tablets. The likes of Toshiba, Fujitsu, and HP -- which could all justifiably claim they never left those markets -- will reemerge with a vengeance. (Here's HP's Tablet PC link.)

Indeed, the big story of 2010 could be that Webpads will relegate Netbooks to the consumer space. Consider, for example, that mobile CRM, which has advanced at a slow-to-moderate clip on smartphones, could explode once tablets are in the hands of business users. (I can imagine that salesfolks forced to enter the client calls in near-real time will not be amused.)

A final point on Apple as a refiner-versus-inventor. If you search of patents and patent applications for portable tablets, you turn up a bunch of other companies, but no Apple. This makes sense. Since most tablet technology is prior art, Apple's iSlate/iPad/GinormousPod is more in the way of a trade secret than a patent-protected product. Hey, given the continued success of the iPhone and iPod against all comers, maybe Apple doesn't even care who tries to copy it.

OK, so here are two interesting design patents for portable tablets. The first is from Quanta Computer out of Taiwan. It's for the rather big-iPod-tablet-like D543,979, awarded in 2007. (Note that design patents don't lock up the rights to technology; they're just for a presentation.)

The second is a 2008 patent for a clunkier looking design from Samsung. This one, patent number7,414,680, has the odd title " Liquid crystal display and tablet computer having the same." (That's how the patent reads.) The apparent meaning is that the display and tablet are part of the same thing--i.e., the tablet. So this one could potentially have some licensing implications. 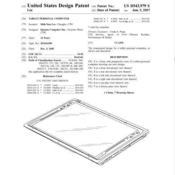 Quanta's design patent for a Webpad.
(Click picture to enlarge, and to see more.)

Let me know your take, by leaving a comment below or e-mailing me directly at [email protected].

Alex Wolfe is editor-in-chief of InformationWeek.com.