A startup from Norway is demonstrating a prototype PC-on-a-stick that could revolutionize the way we take our computing with us--or simply become another intriguing solution waiting for a real problem.
Serdar Yegulalp
Contributor
November 18, 2011

A startup from Norway is demonstrating a prototype PC-on-a-stick that could revolutionize the way we take our computing with us--or simply become another intriguing solution waiting for a real problem.

The company is FXI Technologies AS, and the device is codenamed "Cotton Candy"-- a full-fledged computing device in a package the size of the average USB memory stick. On board is a quad-core ARM Cortex A9 processor with ARM's Mali 400MP graphics coprocessor, which can support full 1080P H.264 playback; 802.11 b/g/n Wi-Fi; Bluetooth 2.1; 1GB DRAM; and up to 64GB local storage via a microSD slot. The device runs Android or Ubuntu in its current prototype phase, but can in theory run anything ARM-powered that fits in 1GB of memory. 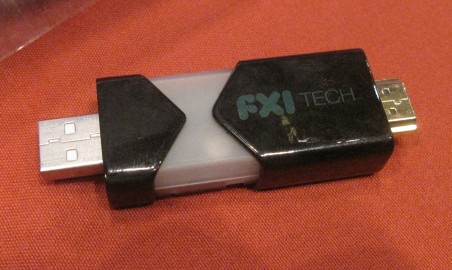 With a USB connector at one end and HDMI at the other, the device can plug into any HDMI display device to render its output. Plug it into a PC and you can use the PC's screen and keyboard to connect to and control the device. The device can get its power over USB but not HDMI; when connected to a TV you might need to use an external power adapter to run the device.

At a press event in New York last night, FXI Technologies' CEO Borgar Ljosland demonstrated the device in conjunction with both a standard 1080p standalone TV and a Macintosh notebook. He played full HD-resolution movie clips from the device; browsed the Web and played YouTube clips via the Wi-Fi connection; kicked off a game of Angry Birds; and ran a number of other Android applications, all behaving as you'd expect. An external mouse and keyboard were needed to do all this, which Ljosland had connected via Bluetooth.

The device has the potential for both corporate and end-user applications. Companies could issue their own branded editions of the device (along with software to match) and allow secure connectivity from most anywhere. Ljosland describes the device as, among other things, being a way to allow standalone screens, especially TVs, to be continuously updated with the latest PC-level technology, without having to buy a whole new TV.

What's still nebulous is how Cotton Candy is going to be delivered to consumers. Ljosland stated that FXI is currently in talks with various OEMs, and plans to have the device out onto the market sometime in the first quarter of 2012. No pricing has been set yet, but Ljosland aims to have it "somewhere under $200."

Other companies are working on similarly open-ended mini-computing devices. Raspberry Pi, for instance, embeds an ARM processor and a number of other components--including video hardware that can perform 1080P H.264 high-profile video playback--into a device that's about the size of a credit card. The makers of the device, a nonprofit venture, aim to sell it for a mere $25, and intend it to be used to teach programming to children or to allow computer access in developing countries. That device hasn't shipped yet.

Based in Long Island, N.Y., Serdar is founding senior editor managing reviews at BYTE, the former open source technologies columnist for InformationWeek, and a regular contributor to many other information-technology publications. Follow him on Twitter as @syegulalp and email him at [email protected].